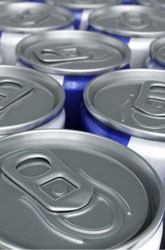 Collect This Article
Download Article
Red Bull, Monster, AMP and Rockstar. These are among the best sellers in the energy drink industry that is estimated to take in $9 billion in 2011. Are they also potential dangers to your children?

If these drinks are part of your child's regular diet, a study released last week by researchers in Miami indicates that your kids could be at risk.

The study, headed by Dr. Steven Lipshultz, dean of child safety at University of Miami's Miller School of Medicine, concluded there is no "therapeutic value" in energy drinks. While the popular drinks advertise benefits ranging from re-energizing athletes to increasing stamina, Lipshultz said it's quite possible the drinks actually have the opposite effect.

Even worse, Lipshultz said the sugar, caffeine and other ingredients in the drinks aren't regulated by the Food and Drug Administration—which classifies them as dietary supplements—and may be dangerous in combination with alcohol and for kids with ADHD, heart conditions and diabetes.

"I was totally shocked by what I found," said Lipshultz, a working pediatrician who also heads the Holtz Children's Hospital in Miami. "We just don't have a lot of information."

Until last year, the U.S. Poison Control Center did not specifically track caffeine-related overdoses related to energy drinks, Lipshultz said. But there are still enough unexplained injuries and deaths to spark significant concern, he said.

In May 2008 in Wellington, Fla., 16-year-old honor student Ashley Ramnauth died after combining energy drinks and alcohol. An autopsy never determined the exact cause of death, but Ramnauth's parents have said they are certain energy drinks are to blame.

In 2003, Baltimore Orioles pitcher Steve Belcher died during spring training. His death was connected to ephedra, a substance that was part of energy drinks at the time. All uses of ephedra have since been banned.

Several countries have ordered complete or partial bans of energy drinks or required warning labels on cans after several deaths that appeared to be related to energy drinks in the past few years. Denmark , Turkey and Uruguay have banned all energy drinks, Germany has banned 11 of 16 brands and Australia has banned 5 energy drink makers.

"Other countries are studying energy drinks and many are banning or heavily regulating the products," Lipshultz said. "At some point, you have to wonder why that is happening."

The American Beverage Association quickly shot down the report last week. "This literature review does nothing more than perpetuate misinformation about energy drinks, their ingredients and the regulatory process," the lobbying group said in a statement on its website. And energy drinker maker Red Bull said in a statement that the study did not take into account the "scientifically rigorous examination of energy drinks by reputable national authorities."

The ABA also argued that teens "aren't large consumers of energy drinks" and that the average energy drink can contains no more caffeine than a cup of coffee.

Lipshultz said the data, based on a review of 121 different studies and government reports, is at odds with the beverage group. According to surveys filled out by users, energy drinks are consumed by 30% to 50% of adolescents and young adults, according to the study. Because all the ingredients are regulated, it's impossible to know how much caffeine is added to energy drinks with guarana, for example. That's a South American plant that contains a high amount of caffeine.

The head of the National Association of School Nurses agreed the study sends up red flags about energy drinks to parents.

"I've seen kids who come in and have had an energy drink in the morning and they will tell me they feel like their hearts are beating out of their chests," said Sandi Delack, who is a nurse at Ferri Middle School in Johnston, R.I.

Delack and Lipshultz offered this advice for parents when it comes to energy drinks:

"This isn't about judging," said Lipshultz. The conversation is a perfect opportunity for teens to learn the importance of monitoring what goes into their bodies. Doctors, teachers, school coaches and others should read the study as well, he said.

"I think it's important that parents just know what their kids are ingesting, and if they are using these drinks, that they are using it correctly," said Delack, referring to concerns highlighted in the study about the combination of energy drinks with stimulants, certain medications or medical conditions.

Lipshultz said while the study wasn't motivated by a desire to conclude that kids should or should not use energy drinks, he believes the evidence points to an inescapable conclusion for now.

"We don't have the evidence," he said. "Why as a parent would I want to have my child take this unregulated drink until there is sufficient information available? In the absence of evidence, children should be discouraged from taking this."

February 21, 2011
Next Article: Keeping Teens Healthy - Benefits of Physical Activity
We enable strictly necessary cookies to give you the best possible experience on Education.com.Cookie policy