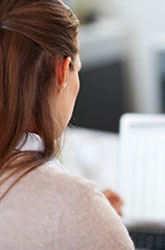 When Mark Zuckerburg was dreaming up Facebook in his Harvard dorm, he was coding and designing a social media platform for college students. Little did he know that just years later, parents would be using the website as a virtual brag book to document every part of their kids' lives.

Hey, everyone's entitled to an update here and there. Just make sure that when using social media, you're not guilty of the Facebook faux pas that make even your best of pals want to "de-friend" you. If one of the following moms sounds like you, shape up and reclaim your social media friends.

The Picture Spammer. You know the one. She's the mom who wants you to see every movement, blink and smile her baby makes. What's worse is when she loads a photo album with essentially the same picture, just with slight variations.

The Chronic Updater. "Ate some lunch. Turns out, Leo likes blueberries! Now it's time to put Leo down for a nap and then it's off to the grocery store!" Sound familiar? That's because you probably have a chronic updater on your friends list. A chronic updater feels the need to document every waking (and sleeping) moment she enjoys with her child on a daily basis.

The Highjacker. This is a sneaky one, because you don't even know this social media mama's plotting against you until she somehow wheedles her kid into every possible conversation online. If your status message reads, "First day of summer!" She'll reply "It's my baby's half-birthday!" If you post about how tired you are, she'll say, "Just wait until you're up all night with a baby."

The Oversharer. Facebook oversharers are the modern equivalent of the type of mom who would show naked baby pictures of you to your prom date. Instead of flashing a photo album, the oversharer feels the need to post pictures of the latest diaper blowout or go into detail about what the doctor said about her baby's irritable bowels. Three words: Too. Much. Information.

The Bragger. Oh, did your kid just learn to walk? The bragger's baby walked out of the womb, actually. So your child said his first word? Her little one's conjugating verbs while speaking perfect French. Oh yeah, the bragger mommy is always two steps ahead of you, so no matter what you post about your child on Facebook, her budding Einstein is just a little bit better. Going toe to toe with this parent means you'll either have to lie or lose, so avoid at all costs.

The Complainer. Look, frustrated parents have to vent every so often, and that's fine. But the type of mom who peppers her news feed with tirades on fatigue, a messy house, feeling unappreciated, or the fact that her library is out of copies of 50 Shades of Grey means automatic deletion.

The Martyr. This is a special breed of annoying parent, since she gives her entire life, personality, free time and sanity for her kids. She's the one who posts that she's busy baking whole wheat bread while homeschooling, knitting all clothes from scratch, making her own paper and decorating with homemade vintage accents. The rest of us Kraft dinner-feeding, TV-watching, high-fructose corn syrup-embracing, mall-shopping moms simply have to bow down to the almighty mother.

If you're guilty of being any of the above Facebook faux pas, don't worry; there's hope! The next time you want to post about your kid, take a step back. Is the post pointless? Does it embarrass your child in ways that will turn him red when he's 16? Does it include gross pictures? If so, feel free to log out. Your Facebook friends will thank you.