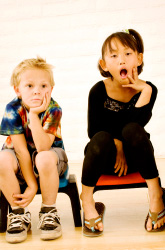 What’s the newest national security threat, according to a recent Council on Foreign Relations independent task force report? Not unrest in Libya. Not a nuclear North Korea. It’s our failing schools. The findings of a 30-member task force, co-chaired by former Secretary of State Condoleezza Rice and former New York City Public Schools Chancellor Joel Klein, depict America at a crossroads: either we implement swift and comprehensive educational reform, or we jeopardize both our domestic stability and our national security.

In fact, in a recent NewsHour interview, Rice said that our “greatest national security challenge” may be our educational shortcomings. While the connection between national security and education may not seem apparent, the report furnishes some startling evidence that link the two:

While circumstances are, in the words of the report, “sobering,” task force members are quick to point out that they are not without remedy—but only through sweeping and dramatic educational reform. Recent positive changes in areas such as school leadership and public acknowledgement are applauded, and the task force concludes with the following bold statement: “Americans can either accept U.S. decline or can come together to support and implement fundamental and radical changes that put the country back on track to fulfilling its promise and potential.”

Under these measures subjects like basic reading comprehension and math would receive increased attention, as would science, foreign languages and technology. To counter the increasingly apparent distributive injustice in American schools, Rice and Klein support school vouchers and charter schools to provide more options for underprivileged children: “the neighborhood school may simply not be the answer any longer,” as Rice told PBS’s Jeffrey Brown.

Critical to these reforms are the Common Core Standards, an initiative that seeks to raise accountability by aligning state standards under a national framework. All but 5 states have adopted the initiative, which was first proposed in 2009 and is due to be fully implemented by 2015.

The report calls for an expansion of the Common Core Standards to include international standards of science, technology and foreign language. Many existing aspects of the Common Core Standards will be an asset in guaranteeing that American students remain internationally competitive: the standards greatly increase the percentage of informational (as opposed to fictional) text read by students in the earliest grades, for example, and require writing in the secondary grades to inform and argue instead of simply narrate. The mathematics standards give more depth to concepts covered only broadly before.

Through modifications like these, the Common Core Standards should help better prepare students for the postsecondary training required by full global participation and a strong national defense.

A catalyst for change

The report’s alarmist tone has been criticized by some, and dissenting views added to the document cite concerns about its focus on a top-down standardized testing model and widespread privatization. Still, the report’s authors contend that “calling the crisis in education

a national security concern is not a gimmick or an empty phrase.” All parties agree on one thing: the continued crisis in American education is not something we can afford to ignore.