The Importance of Family Meals 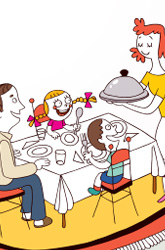 In today’s world of hectic schedules, a myriad of after-school activities, and dual-working households, it’s no wonder that family mealtimes often fall by the wayside. Instead, dinner might consist of several types of takeout food that each family member grabs whenever convenient. A study done by the Center on Addiction and Substance Abuse (CASA) at Columbia University found that only about 50% of twelve-year-olds have dinner with their parents every night, and only a quarter of seventeen-year-olds continued to do so. Apparently conflicting schedules and teen jobs make eating together a struggle for many families, especially those with children in their late teens.

But is this healthy for our children? According to the research, kids who share dinner with their family are smarter, healthier, and more socially adept. This correlation is not straightforward, however, and “the fact that a family can organize itself for such events may also be reflective of other things they do that are supportive of children,” points out Dr. David Dickinson, a professor and researcher at Vanderbilt University. Regardless, having family meals is “one piece in the puzzle,” Dickinson says, and although it’s difficult to say how big a piece it is, spending time being present as a family has a clear impact on a child’s wellness in key areas.

In 2001, Dickinson was involved in a study that looked at why some young children learn how to read easily while others struggle. They examined several factors that might impact the children over the course of three years, and discovered that shared mealtimes were the strongest predictor of good language and literacy development— even stronger than how often parents read to or played with their children.

The CASA study found surprising evidence that parents with the lowest levels of education ate together with their children the most often, whereas parents with college degrees or more were much less likely to share meals with the rest of their families. “It is the nature of the conversation that matters for language and associated literacy skills,” says Dickinson. The takeaway? Include your child in conversations about a range of topics—not just “kid” topics—and don’t shy away from using a large vocabulary at the dinner table. Even if your kid isn’t familiar with certain words or subjects, being engaged in these higher-level conversations actually helps him learn from context.

Studies show numerous health benefits, both physical and mental, that family meals can give children. Kids in families who eat together more often are less likely to drink, smoke, or do drugs. They are also at a lower risk for developing eating disorders, becoming depressed, or contemplating suicide.

A study done at Rutgers also found that kids who shared meals with their families ate a more balanced diet with fruits, vegetables, and foods rich in fiber, vitamins, and calcium. They were also less likely to chow down on junk food and drink unhealthy beverages like soda. Plus, eating without distractions like the television or computer has been shown to reduce the tendency to overeat for both children and adults, so gathering around the table for dinner is a win for everyone.

Family meals also support kids’ social development. The CASA study found that children in families that shared meals more often were more likely to be able to carry on a conversation, to feel that their parents were proud of them, and to say that their family got along well.

If you want to purge “LOL” and “like, totally” from your kid’s vocabulary, start at the dinner table, which is one of the few regular opportunities a kid has to have a sustained conversation with adults. Being able to talk comfortably with people other than her school peers will increase her confidence when she’s in different social situations. Frequent, focused family time is also a great way to reinforce your child’s self-esteem by demonstrating a genuine interest in her life and inviting her to feel more of a part of your life through conversation.

Tips to Get the Most Out of Family Meals

It may take some stretching and wiggling of your family’s schedule to make family meals more frequent, but the rewards of increased family-centered time are definitely worth it. Whether your kid is struggling with healthy habits, self-confidence, or feeling connected with her family, sharing a meal together will build her up, and the benefits will filter into other areas of her daily life.