Famous Asian Americans in the Arts 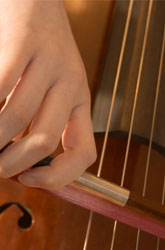 Lee was born in San Francisco, California on November 27, 1940 to parents of Hong Kong heritage. Lee was raised in Hong Kong until the age of 18, when he emigrated to the United States to claim his US Citizenship and receive his higher education. During this time he began teaching martial arts, which soon lead to film and television roles.

Lee was famous for many martial art films and television roles in the U.S. and all over the world. He was also a competitive fighter and a teacher of the martial arts as well. Lee was renowned for being physically fit and and for his vigorous, dedicated fitness regime. One of Lee’s most famous film’s is the Warner Brothers picture Enter the Dragon. Only a few months after the film's completion and 6 days before its July 26th release date, the supremely fit Lee mysteriously died.

His work in films and in the martial arts as a whole is revered all over the world and statues and dedications in his honor can be found throughout the streets of Hong Kong. He is a cultural icon and considered one of the most influential martial artists of the 20th century.

Vera Wang is an American fashion designer based in New York. She is most famously known for her stunning wedding gown collections.

Vera Ellen Wang was born on June 27, 1949 in New York, where she was raised by parents of Chinese descent. When she was in high school, Wang trained as a figure skater and competed at the 1968 U.S. Figure Skating Championships. After graduating from The Chapin School in 1967, she attended the University of Paris and earned a degree in art history from Sarah Lawrence College. When she failed to make the US Olympics team, she entered the fashion industry.

Wang worked as a senior fashion editor for the world-famous fashion magazine, Vogue, for sixteen years. In 1985, she left Vogue after being turned down for the editor-in-chief position currently held by Anna Wintour and joined Ralph Lauren, where she worked for two years as the design director. In 1990, she opened her own designer boutique in the swanky Carlyle Hotel in New York City, where her trademark gowns are still featured today. Her name and her gowns are known all over the world and in recent years she has expanded her brand to include fragrance and home collections.

Yo-Yo Ma was born in Paris on October 7, 1955 to Chinese parents. Music was in his blood from the beginning. His mother, Marina Lu, was a singer, and his father, Hiao-Tsiun Ma, was a violinist and professor of music. At the age of five, his family moved to New York City where he was raised.  When he was very young, Ma began studying violin, and later viola, before finding his true calling in the cello in 1960 at the ripe old age of four. Ma was indeed a child prodigy and he began performing before audiences at age five, and performed for Presidents John F. Kennedy and Dwight D. Eisenhower when he was only seven years old.

Ma studied at the Julliard School of Music with Leonard Rose and briefly attended Columbia University before ultimately enrolling at Harvard University. However, even before that time, Ma had been gaining fame and had already performed with most of the world's top orchestras. His recordings and performances of the Johann Sebastian Bach: Cello Suites are some of his most well known work. Ma has been dedicated to bringing music into the lives of young people through education programs and family concerts and he is one of the most revered cellists of the modern age.

Maya Lin was born in Athens, Ohio on October 5, 1959. She is an American artist and architect known for her work in sculpture and landscape art.

In 1981, at the age of 21, when she was still an architectural student at Yale University, Lin rose to fame when she won a public contest to design the Vietnam Veterans Memorial in Washington, D.C. Her design beat out more than 1,400 other entries. The black cut-stone masonry wall has the names of 58,261 fallen soldiers carved into its face. The wall is granite and V-shaped, with one side pointing to the Lincoln Memorial and the other pointing to the Washington Monument.

The design was initially controversial as it was thought to be an unconventional and non-traditional design for a war memorial. Opponents of the design also objected to Lin's Asian heritage. A compromise was eventually reached and Lin’s design stood ground. The memorial was completed in late October 1982 and dedicated on November 13, 1982. It has since become an important pilgrimage site for relatives and friends of the American military casualties in Vietnam, and personal tokens and mementos decorate the wall in their memory. Lin has since continued to create many significant sculptures and architectural designs for projects all over the world.