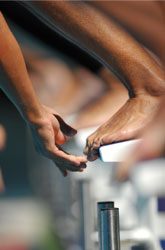 Born September 10, 1901 in Yiyang, Hunan, Ho Feng-Shan was a Chinese diplomat who saved thousands of Austrian Jews during the early years of World War II.

In 1938, when Germany took over Austria, Dr. Ho was in Vienna serving as the Chinese General Consul. The situation for Austrian Jews was becoming increasingly more dangerous, and many tried to flee the country, but more often than not, they had nowhere to go because most of the world’s nations would not accept Jewish refugees. Against the orders of his superiors, Ho began issuing visas to Shanghai to Austrian Jews so that they could leave Austria. The exact number of visas given by Dr. Ho to Jewish refugees is unknown.

What is known is that Dr. Ho issued the 200th visa in June 1938, and signed the 1906th visa on October 27, 1938. Exactly how many Jews were saved through his actions is unknown, but given that Ho issued nearly 2,000 visas only during the first 6 months at his position, the number could be in the thousands. Later, Ho Feng-Shan served as the Republic of China's (ROC) ambassador to other countries, including Colombia, Mexico, Bolivia, and Egypt. Ho retired in 1973 and settled in San Francisco, CA, where he wrote his memoirs, 40 Years of my Diplomatic Life, which was published in 1990. He died in San Francisco in 1997 at the age of 96 as a mostly unknown hero of World War II.

Dalip Singh Saund made history in 1956 when he became the first Asian American elected to the United States Congress. Saund was born in Chhajulwadi, Punjab, India, to a Sikh family on September 20, 1899.

He came to the United States in 1920 to study at the University of California, Berkeley, where he earned a Ph.D. in mathematics. After working as a farmer for more than 20 years after he left school, he campaigned to allow "Hindus," as people of South Asian descent were called at that time, to become naturalized citizens of the United States. After the Luce-Celler Act was passed in 1946, he applied for naturalization and became an American citizen in 1949.

In 1956, he made history when he won an election for an open seat in the United States House of Representatives as a Democrat against a famous aviator, Republican Jacqueline Cochran. He was re-elected twice, becoming the first Asian American, the first Indian American and first member of a non-Abrahamic faith to be elected to Congress. In May 1962, he suffered a severe stroke that left him unable to speak at all, or walk without assistance, thus ending his congressional career. Still, by pioneering the halls of Congress as he did, Saund opened the door for other Asian Americans to enter U.S. politics.

Michelle Kwan was born in Torrance, California on July 7, 1980 to Chinese immigrants from Hong Kong. She is an American figure skater who won her first Olympic medal at the 1998 Winter Olympic Games in Nagano, Japan.

Kwan’s interest in figure skating began at the age of five when she followed her two older siblings (hockey player Ron and figure skater Karen) onto the ice. Karen and Michelle began training together, practicing four hours a day, waking up at 3 in the morning to skate before school, only to go straight back to the rink right after school to skate again.

Michelle has won nine U.S. championships, five World Championships, and two Olympic medals. She is the most decorated figure skater in U.S. history. Known for her sheer talent and consistency and her passionate artistry on the ice, and she is considered one of the greatest figure skaters of all time.

Born “Duke Paoa Kahinu Mokoe Hulikohola Kahanamoku” on August 24 in 1890 on the outskirts of Waikiki, Duke was a Hawaiian swimmer, actor, lawman, businessman and a five-time Olympic medalist in swimming, who is credited with spreading the sport of surfing.

Kahanamoku developed his stellar swimming and surfing skills on the beaches of Waikiki and began breaking records when he was just a teenager. Kahanamoku easily qualified for the U.S. Olympic swim team in 1912, breaking the record for the 200 meter freestyle in his trial run for the 4×200 relay. He went on to win a gold medal in the 100 meter freestyle in the 1912 Olympics in Stockholm, and a silver medal with the relay team. During the 1920 Olympics in Antwerp, he won gold medals both in the 100 meters (beating out fellow Hawaiian Pua Kealoha) and in the relay race. During the 1924 Olympics in Paris, he finished the 100 meters with a silver medal with the bronze going to Duke's brother, Samuel Kahanamoku. He also played for the U.S. water polo team at the 1932 Summer Olympics.

Throughout his career, but especially after retiring from the Olympics, Kahanamoku traveled internationally giving swimming exhibitions. He is credited with popularizing the sport of surfing, previously known only in Hawaii, by incorporating surfing exhibitions into these visits as well. While living in Newport Beach, California on June 14, 1925, Kahanamoku rescued eight men from a fishing vessel that capsized while trying to enter the city's harbor. Using his surfboard, he was able to make quick trips back and forth to shore, increasing the number of sailors he was able to save. Newport's police chief at the time called Duke's efforts "the most superhuman surfboard rescue act the world has ever seen."

Duke is a member of the U.S. Olympic Hall of Fame and he served as sheriff of Honolulu, Hawaii from 1932 to 1961, serving 13 consecutive terms. During this period, he also appeared in a number of television programs and films. Today, a monument at Waikiki beach in Honolulu stands in his memory.