School Fundraising During a Budget Crisis 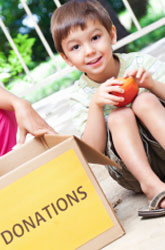 Like thousands of schools all over the country, Mission Vista High in Oceanside, California faced tightening budgets. Worried that their beloved magnet school and its programs would buckle under the financial stress, a group of parents launched a non-profit organization called the MVHS Timberwolves Foundation to raise money.

Last January, the foundation confronted its biggest challenge: a proposal to merge Mission Vista High with a middle school to reduce costs. Parents most feared that the move would alter the school’s special schedule that allows students to take more classes and more advanced subjects—one of the main reasons the school attracts so many families.

Fortunately, the schools did not merge. But president of the Board of Directors and Timberwolves Foundation, Dave Mears, says the episode crystallized the foundation's mission to keep classes and programs intact through financial turmoil.

A tough economy and shrinking government budgets are forcing schools to consider cutting programs, but not if parents have anything to say about it.

Mike Griffith, a senior policy analyst for the Education Commission of the States, says that education funding for the 2011-2012 school year will be $25 billion lower than the previous year—that’s almost a 5% percent decrease. Although states are receiving about the same amount of tax money, the federal stimulus package that had kept schools afloat since 2009 is drying up.

"For most states, this is going to be a bad year," Griffith says. "Most places have been making three solid years of cuts—in some places, four years."

Meanwhile, he notes that less than 1% of all public school funding comes from donations from parents and corporations. "It's the money for any extra stuff."

What’s a parent to do in these rough times? “The National Parent Teacher Association encourages parent groups to advocate for public education funding rather than relying on fundraisers,” says spokesman James Martinez.

"The education budget cannot and should not be balanced on the backs of families," Martinez says. "Although parents fundraise to help, they're not fundraising to replace money for programs that should typically be provided by the education budget."

While the gaps can’t be filled by individuals alone, they can definitely benefit from parent advocacy and fundraising. Mears says the Timberwolves Foundation raised about $20,000 over the past year, and are asking teachers and schools how best to distribute that money.

To run a successful fundraiser, a group needs a specific goal and plan. For example, do you want to protect the school's librarian from a layoff, keep the science lab open or allow students to play on sports teams without paying a fee? Identifying a goal will determine how to move forward.

Here are a few more tips from Mears on how to raise money:

Appeal to parents. People are willing to give money to things they care about most, which are their kids. Make it clear that the school needs help with specific examples. In this way, Mears’ foundation was able to raise about $5,000 from parents.

Ask local companies for help. “Businesses often donate money toward school groups if they're asked,” says Mears. Ask the employers and companies of other families if they are willing to contribute money for the cause. About half the money raise by the Timberwolves Foundation came from one parent's employer.

Look beyond typical school fundraisers. You're probably used to buying candy bars and wrapping paper to pay for special programs, so give people a new way to help. The Timberwolves Foundation held events like golf outings and restaurant fundraisers that gave a portion of sales back to the cause.

The good news is that tight budgets probably won't be around forever. Griffith expects the situation to brighten in 2012, once state tax revenue rises. If parents can keep programs from disappearing until then, their kids won’t have to suffer the consequences of budget cuts.

Next Article: Charter Schools on the Rise: What You Need to Know
We enable strictly necessary cookies to give you the best possible experience on Education.com.Cookie policy