Log in with different email
For more assistance contact customer service
School and Academics
Bullying and Teasing
Can We Stop the Gay Bullying Epidemic?

Can We Stop the Gay Bullying Epidemic? 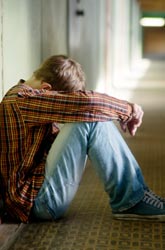 We've all heard the expression: "Sticks and stones may break my bones, but words will never hurt me." But what happens when hateful words build and multiply until they're too much for one teenager to bear? No longer an issue of harmless playground teasing, bullying can mean the difference between life and death—and it has for a number of gay teens whose suicides have made headlines in the past month.

Most Americans are now familiar with Tyler Clementi, the gay Rutgers student who took his own life after his intimate encounters were broadcasted over the Internet. Then there were the tragic suicides of two 13-year olds who experienced constant ridicule for being gay. And these are just a few of the high-profile cases that the media latched onto. How many other individuals are facing daily harassment as a result of their sexual orientation?

On October 1, 2010, Arne Duncan, U.S. Secretary of Education, released a statement in response to the recent suicides. “This is a moment where every one of us—parents, teachers, students, elected officials, and all people of conscience—needs to stand up and speak out against intolerance in all its forms…. It is time we as a country said enough. No more. This must stop.”

But how? It’s easy to point fingers at the specific bullies who drove these teens to misery, and eventually, suicide. There is a larger issue at hand, though: What should our nation's schools do about it? Are current anti-bullying policies effective in preventing gay bullying? The jury is out, and the verdict is not looking good. According to a survey conducted by the Gay, Lesbian and Straight Education Network in 2009, only 18 percent of kids said their school's anti-bullying program addressed gay bullying.

Laura Kauffman, Ph.D. says that anti-gay vernacular runs rampant throughout today's everyday speech, too. "Many students—and adults—can still be heard saying, 'That's so gay.'" Studies show that kids notice, too. 90 percent of high school students say they hear the word "gay" used as the equivalent of calling someone stupid or worthless, according to a National School Climate Survey. Kauffman explains, "Many people do not realize the negative effect of this kind of language on GLBT students. It is time to start educating a new generation that no matter what you believe, respect is a value that the school will not flex on."

Talking sexuality in schools is never an easy feat, though. Teachers and school administrators find themselves in a difficult position when it comes to sexuality rhetoric. By even having a conversation about homosexuality, educators risk setting themselves up for a harsh and angry backlash, even when they don't intend to initiate a moral debate. A Minnesota school district heavily affected by teen suicides in the past year recently found itself the target of "hate letters" after announcing that they were rethinking the school's current anti-bullying policy—which took a "neutral" stance on homosexuality.

Many schools do take the route of neutrality, deciding that it is better to steer clear of the topic alltogether. After all, by not condemning or promoting homosexuality, you cannot do any damage one way or the other. Right? Wrong—according to Annie Fox, M.Ed, a passionate educator who has devoted much of her career to fighting bullying.

Without explicitly naming the specific bullying behavior, Fox explains, anti-bullying programs simply don’t stand a chance. If kids never hear a trusted adult overtly explain that anti-gay bullying words and actions are unacceptable, they are given ample room to decide for themselves—and some kids will come to the conclusion that name-calling, teasing, and exclusion of gay peers is tolerable. Furthermore, students are less likely to report bullying incidents if it is not firmly established that gay bullying is absolutely prohibited. To truly maintain a comprehensive anti-bullying program, schools need to explicitly state that anti-gay words and actions will not be tolerated.

Although you don't have total control over the approach a school takes against bullying, don't forget about the key role you can play. As a parent, you have the power to transform the way your child interacts with others. Read on for tips:

What Parents Can Do:

October 18, 2010
Next Article: Social Life in Middle and High School: Dealing With Cliques and Bullies
We enable strictly necessary cookies to give you the best possible experience on Education.com.Cookie policy