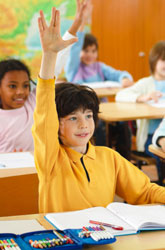 Studies done in the 1960s and 1970s found that boys are more analytical and girls were more intuitive in their learning styles. For example, it was found that girls can sit still for longer periods of time and that boys were more willing to take risks. The studies were meant to provide a general observation of gender learning styles, but over time they've created stereotypes in learning that may sell some learners short.

Out of these studies, gender expectations became more pronounced. Stereotypes were expected as the norm: Boys are more mischievous. Girls are more helpful. Boys are more adventuresome. Girls are more afraid of technology. Over the years, these gender stereotypes took root in the classrooms. While the studies may be helpful for pinpointing the learning styles of some students, it is certainly not the case for all students.

Take the example of research that states that boys are better at math than girls. Joshua Altschule, Psy.D from Albany, NY states that “other research suggests that this is more the result of a student’s confidence rather than biology.” He says that it's the values and learning expectations that teachers and families place on students that end up being “the major determinant of math learning ability.”

Everyone Is an Individual

Dr. Altschule says that parents and teachers should pay attention to each child’s individual learning style rather than to lump children into groups according to their gender. “There is much more variability in learning styles within versus between gender,” he says. As a result, he encourages parents and teachers “not to develop overall beliefs around male versus female achievement. Rather, the optimal learning environment should be determined on a student-by-student basis to highlight strengths and areas that need improvement.”

Erika Bushey, fourth grade teacher at Shaker Road Elementary School in Colonie, NY, has had a similar experience with her students. She says that the differences she has noticed in how her students learn are not necessarily gender related, but based more on individual learning styles. “Some of my students fit the stereotypes of how boys and girls learn best, but many do not,” she says. “Every student enters the classroom with his or her own life experiences, interests and personality, making them all unique individuals, regardless of their gender.”

She suggests giving students choices, whenever possible, to allow for them to demonstrate their learning in a way that is natural and comfortable. For example, if students are given an opportunity to explore an academic topic with a hands-on activity or a written project, students should be given the choice as to which activity they wish to do. Often teachers will assign the activity based on their own expectation of that child and his or her learning ability. “When students have choice,” Bushey says, “they have genuine interest.”

Busting Stereotypes in the Classroom

Gender expectations are introduced to children in the classroom as early as preschool. Children might be asked to divide into groups with boys in one group and girls in another. As simple as this action is, it may be one of the first times that gender differences are accentuated for children. In the preschool environment, it is helpful to have a mix of toys traditionally meant for boys and toys traditionally meant for girls. The toys should be mixed together in a play environment in which children are allowed to freely explore everything.

As students get older, Ms. Bushey recommends supplementing the curriculum with both male and female presenters so that students are exposed to role models of both genders. “I also encourage all students to see themselves as writers, mathematicians, scientists, historians, etc…whether they are male or female,” she says.

Whether students present the stereotypical male or female behavior patterns in the classroom, it is important to have everyone participate in all activities. “Last year we did a simple sewing project for Mother’s Day and many of the boys were very excited to have the opportunity to sew,” she says.

When a child is struggling in school, try not to look toward gender differences as the cause of the child’s problem or the way in which the problem can be remedied. While learning style may have something to do with the child’s difficulties, it is more helpful to create a supportive and nurturing environment in which the child can overcome difficulties. Dr. Altschule says, “The best approach is to have regular communication with teachers and academic support accompanied by the utilization of a positive reinforcement behavior plan at home.”