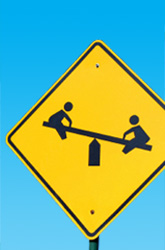 Does this mean that playgrounds aren’t safe? Not according to Dr. Kieran Phelan, associate professor of clinical pediatrics at the Cincinnati Children’s Hospital Medical Center, as well as at the University of Cincinnati. Instead, it means that parents have to make appropriate choices regarding playground safety.

“From a parental standpoint,” says Dr. Phelan, “the message shouldn’t be misconstrued as ‘You must never bring your child to the playground.’” Instead, he advises that parents focus on three key elements:

Height of the Structures

Look at the height of the playground equipment. According to impact and engineering studies, a safe height is considered less than 2.5 meters (approximately 4 feet) off the ground. Any higher than that, your child is at a potential risk for a severe head injury or extremity fracture. “In general, older playgrounds and those that have fallen into disrepair have higher, much more risk-prone structures,” Dr. Phelan says. So watch out for very high slides, climbing apparatuses or other playground equipment that reaches more than the suggested distance off the ground.

The second key to a safe playground experience for your child is the use of impact-absorbing materials on the playground’s surface. “Children who fall onto asphalt surfaces can become severely injured even if they fall from only a meter in height,” says Dr. Phelan. Asphalt surfaces are rare on public playgrounds today, however. Most playgrounds include surfacing made of either shredded rubber, wood chips, sand or other impact-absorbing substances.

Even if the substances can absorb the impact, they won't do so effectively unless they are deep enough below the surface of the playground. About 4 inches of surfacing is required to absorb the impact of your child’s fall enough to avoid serious injury, but some guidelines recommend up to 12 inches. Although most playgrounds start off with the right amount of surfacing, the substances can erode over time. Make sure that someone is maintaining the playground’s surface material and that it stays at a safe depth.

This third guideline depends less on the state of the playground itself, and more on you and your child. If your child is very active and not afraid to take risks, you’ll have to be extremely vigilant on the playground. Young children should not be playing on equipment that is obviously for older children, and both young and old children should be supervised so that they do not take risks on playground structures that are beyond their capabilities.

Which piece of the playground is most dangerous? According to Dr. Phelan, monkey bars win that contest hands down. “Monkey bars been shown over and over again to be risky,” he says. “They’re challenging and engaging to the child, but many of the structures, given the height and developmental challenges presented to child, elevate the child’s risk of severe injury in the case of a fall.” Swings, surprisingly, do not cause a comparable number of fractures as either monkey bars or climbing apparatuses.

What About Backyard Equipment?

Many people overlook their own backyard swingsets and gyms when considering the safety of playgrounds, Dr. Phelan says, but the same guidelines apply. Equipment should be at a safe height, surfaced by impact-absorbing materials at the proper depth and supervised by parents as needed. Many backyard structures are installed over regular grass or dirt, neither of which absorb the impact of a fall. In the wintertime, frozen surfaces can be especially hard, creating the potential for a more severe injury. So watch out, and consider putting impact-absorbing materials that fit the requirements beneath your backyard play equipment.

Next Article: Be Ergo-Wise This School Year: How to Keep Kids In Alignment
We enable strictly necessary cookies to give you the best possible experience on Education.com.Cookie policy