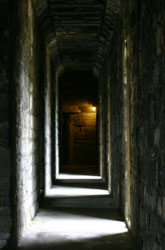 Think you know your favorite hair-raising holiday? Think again. Halloween is a complex holiday with a multi-layered past steeped in religion, mythology and superstition alike. This October 31st, resurrect the ghosts of Halloween past for some historical high spirits!

Despite its rather grim associations today, October 31st once had a more auspicious outlook. For the lovesick and lonely hearted who found it difficult to wait for February 14th every year, the Halloween of yesteryear afforded plenty of opportunities for courtship and romantic prediction. Divination games played in the 19th century at Halloween included the interpretation of cards, the reading of egg whites and apple peels for the name of a future spouse, the casting of love spells and the burning of nuts to determine one’s marriage. Some traditions in the British Isles had would-be Juliets throwing skeins of wool out their windows at night in the hopes that a future lover would pick them up, or cooling molten lead in water to determine a potential husband’s livelihood. Halloween’s roots in mystery made it prime time for this kind of superstition. Given its earliest associations as a fertility festival, it is not surprising that Edinburgh’s “Hallow fair” was known as a time when “Love’s Stalks are Scattered,” as historian Nicholas Rogers notes in his book Halloween: From Pagan Ritual to Party Night.

To celebrate: Have a pippin pairing party! A pippin is another word for apple. While many contemporary Halloween parties include bobbing for apples, try this Old World take on the game for some matchmaking mischief. Once everyone has had the chance to bob for an apple, peel your apple in a single continuous strip (this may require adult hands if smaller children are playing, as apple peeling can be tricky). Drop the apple pairing over your left shoulder, jump, and take a peek—whatever shape the apple pairing falls in will resemble the first letter of your love’s name!

Few people know that the holiday’s name comes from All Hallows’ Eve (later truncated to Hallows’ Evening and Hallowe’en), a reference to the Catholic festival of saints on November 1st. The Feast of All Saints is celebrated the day after Halloween as Catholics around the world commune with these holy intercessors. The day following All Saints’ Day is All Souls’ Day on the Catholic liturgical calendar, as well as in some Protestant traditions. This feast day commemorates “the faithful departed,” and worshippers offer prayers in behalf of the deceased.

Especially popular in Latin America and Mexico, the Day of the Dead, or Dia de los Muertos, is observed with color and pageantry. Though rituals vary from place to place, many celebrants don vibrant costumes and masks, participate in dance and song traditions, and end the day at the cemetery to honor their kindred dead by bringing gifts and offerings. Probably the most recognizable imagery of this festival comes from José Guadalupe Posada’s 1913 print “La Calavera Catrina,” which depicts a richly dressed female skeleton.

To celebrate: Make a papel picado banner! In Spanish, this means “pierced paper”, and it is a traditional way to celebrate the Day of the Dead. You’ll need tissue paper, scissors, string, and a pencil. Fold the tissue paper edge to edge (as opposed to corner to corner) multiple times, but not so many times that it is too thick to cut. Use your pencil to draw designs along the fold and on the tissue, but NOT on the corners. Skeletons are a customary design for Dia de los Muertos. Cut out your drawings using the scissors, being careful not to cut the corners of the square. When you unfold your paper, you will have a decorated tissue square (similar to a paper snowflake). Make several and attach them by folding over the top ¼ inch of each tissue paper over your string to create a banner.

The forerunner of apples and candy, soul cakes were distributed in the Middle Ages to poor parishioners who came door to door offering prayers on behalf of the family’s recently deceased on All Hallows’ Eve. These beggars were paid in pastries for their heavenly pleas, and ballads still heard today echo this centuries’ old practice:

Soul! soul! for a soul-cake!

I pray, good misses, a soul-cake—

An apple or pear, a plum or a cherry,

Any good thing to make us merry,

One for Peter, two for Paul,

Three for Him who made us all.

Later, soul cakes became compensation for mummers, or traveling performers who enacted scenes and paraded in motley masquerade through the houses of the village. The tradition of soul cakes may have pagan origins that date to the Celtic festival of Samhain, the rough equivalent to our Halloween. Among other practices at Samhain, food and drink were set out to appease ancestral souls. Going “a-souling” has shifted over the years to going trick-or-treating. Once an act of charity, the practice of going door to door begging for treats is now an act of mischief and childish delight.

Mix the flour and spices and set aside. Then, cream the butter and sugar, stirring in the beaten egg yolks and flour/spice mixture. Mix in the raisins last, and add milk as necessary to make dough. Form small balls of dough into flat cakes and cook at 375 degrees on a well-greased pan until golden.