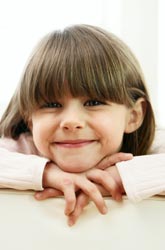 It’s normal for your child to have mealtime or bedtime rituals, such as drinking from a favorite sippy cup, or reading a bedtime story. As long as a disruption in the routine doesn’t cause a dramatic meltdown, it’s nothing to worry about. But, when the slightest change in routine causes temper tantrums, or when rituals take hours and affect your family’s functioning, it could be a sign that your child may be developing obsessive-compulsive disorder (OCD).

While symptoms of OCD usually appear around are age nine or 10, it has been diagnosed in children as young as three, says Dan Geller, PhD, director of the Massachusetts General Hospital Pediatric OCD Program. Usually, kids develop a few rituals over months or years, says Geller, and eventually those rituals escalate over the course of a month or so until they’re a big problem.

There aren’t any definitive events (like trauma) that trigger OCD. Still, keep watch for separation anxiety, phobias (of dogs, bees, water) or generalized anxiety (a kid who’s a “worrier”), as children who have OCD often have other types of anxiety disorders as well. “Separation anxiety [at age four or five] may be the first clue,” says Geller, “some degree of separation anxiety is normal, but by the time kids can go to preschool, we expect them to tolerate some separation.”

If you’ve noticed that your child’s rituals are starting to interfere with their everyday life first, seek out a specialist (check the Obsessive Compulsive Foundation for pediatric specialists).

Use these tips from our experts to help your child succeed, no matter what:

Obsessive-compulsive disorder can be everything from a slight annoyance to a major disruption. But, even if your child seems overwhelmed now, with therapy and help at home, he can change his behavior and take charge of his OCD, changing his days and yours for the better.

Next Article: Anxiety in Children and Adolescents
We enable strictly necessary cookies to give you the best possible experience on Education.com.Cookie policy