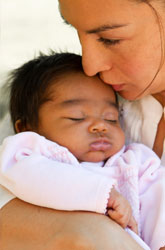 So your baby was born at 11 pounds, 3 ounces, and you’re Googling desperately to see whether his high birth weight correlates to any health problems down the line. Surprisingly, you find websites screaming that babies born at higher birth weights actually develop higher IQs than their peers. Not only that, but other studies have shown that larger babies tend to have various health benefits, such as a lower risk of heart disease.

So is your baby destined to be the next Einstein? A future Mozart or Van Gogh? Not necessarily, maintains Dr. Ezra Susser, Professor of Psychiatry and Epidemiology at Columbia University. In order to fully understand this research, you’ll need to take it with a grain of salt. Here are some caveats that make this research somewhat less startling.

Possibly the most important factor to this research is the range of babies who were studied. Most of the studies on the subject compared babies with low birth weight to those with average birth weight. The cap for these studies has usually been 4 kg, or about 8.8 pounds. Therefore, according to Dr. Susser, “generally the same association does not pertain to the highest birthweight babies.”

The causes for babies with the highest birth weights can often be traced to gestational diabetes or obesity, whereas many babies with “somewhat high” birth weights (within the normal range) are unrelated to these issues. Therefore, according to Dr. Susser, “the birth weight effects are not linear at the high end…But birth weight is changing, and it varies across societies, so there is no exact way to differentiate very high birth weight that is ‘healthy’ from that which is ‘not healthy.’”

Caveat #2: Is the Research Conclusive?

The second major caveat is that the initial research “was susceptible to confounding by unmeasured aspects of family context and genes,” according to Dr. Susser. In other words, the results of those studies may not be conclusive. More recently, however, sibling studies (which are much stronger than the original studies) have successfully found a positive association between birth weight and IQ—but not a very large association at all.

Caveat #3: So What Does This Mean For My Child?

If you’ve seen the supposed results of the sibling studies, you might believe that your child with a large birth weight is destined for greatness; alternatively, you might fear that your child who was born at six pounds will never score high on an IQ test. Either way, you’d be wrong. “The association is not large, so it would not matter to an individual,” explains Dr. Susser. “But it would matter for a population (shifting the curve a bit) and could reveal causal mechanisms.” In other words, the statistics do show that overall, babies with a higher birth weight are slightly more likely to have slightly higher IQs—but the statistics are only significant when you look at them across an entire region. Your specific child, on the other hand, has only a very tiny statistical chance of having a higher IQ due to her high birth weight—or of having a lower IQ due to her low birth weight.

Despite these caveats, you may still be wondering why (relatively) high birth weight is in some way related to IQ and cardiovascular health. In order to understand why these may be correlated, it is important to understand the causes of low birth weight.

Most experts believe that the placenta is the key to understanding why some babies start off at a low birth weight. If the function of the placenta is compromised, fetal growth is compromised as well because the fetus does not receive enough nutrition through the placenta. But what causes impaired placental function? Causes may include both genetic variations and environmental exposure to various toxins. So it could be that the lack of fetal nutrition contributes both to a low birth weight in the fetus, as well as health and IQ problems down the line.

What Does This Mean For Parents?

So what can you do to take advantage of this research? At this point, not much. There’s too much speculation out there to know what this research can say to the individual parent. It is, however, important to know the following facts:

Just because your baby's birthweight doesn't guarantee super intelligence down the road doesn't mean he's not capable of amazing things. Exercising his brain power with open-ended play, stimulating activities and reading lots of books will give him a developmental leg up when it comes to growing up healthy and learning new skills.

Next Article: Seven Ways for Young Children to Be Smart
We enable strictly necessary cookies to give you the best possible experience on Education.com.Cookie policy