Kindergarten Cut-Off Birthdays: Push Ahead or Hold Back? 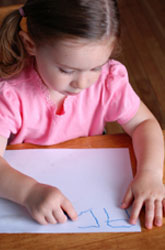 Your child is right before or after the cut-off age for kindergarten, and you’re faced with a big decision—do you push him ahead, so that he’s the youngest in his class? Or do you hold him back so that he’s the oldest in his class? You’ve probably heard conflicting views from well-meaning friends and relatives, but in the end, it’s your choice to make. Understanding the different components of the decision can help you to make the right choice for your little one.

Is Your Child Ready for Kindergarten?

The first question to ask is whether your kid is academically and socially ready for kindergarten. Kristin Fitch, author of Parenting without a Paddle: Navigating the Waters of Parenthood and CEO of ZiggityZoom.com gives several skills that your child should have in order to function well in a kindergarten classroom.

Socially, Fitch says that potential kindergarteners should be able to communicate their needs, sit and listen quietly, work both independently and with their peers, and follow two- and three-step directions. In addition, your child should have mastered fine motor skills, such as gripping a pencil correctly, cutting well, and picking up small items. He should also recognize numbers and letters, be able to count, and have some basic computer skills. To be ready for kindergarten, your little one should also be proficient in basic life skills, such as putting on a jacket and zipping it, taking off a backpack, and hanging up a coat on a hook.

Other skills that are helpful, but not completely necessary, for kindergarten readiness include recognizing both capital and lowercase letters; drawing circles, squares, triangles, and rectangles and labeling them verbally; coloring and cutting accurately; and writing a child's first name. If your kid has mastered all of these skills, you can probably consider putting him into kindergarten—even if he doesn’t quite make the cutoff.

But if your child is born right at the cutoff date, you may be wondering whether it’s best for him to be the oldest or the youngest in his class. According to Fitch, the research is mixed.

“Studies that have been done are usually small studies,” says Fitch. “Because states have different kindergarten age cut-off dates, it is difficult for educators and researchers to make a determination. Many additional factors go into a child’s school readiness and success in school than their age upon entry into kindergarten.”

There are studies, however, that show real advantages to being one of the oldest in a grade, and no advantages to being one of the youngest. Older children in each grade tend to have a higher level of academic achievement in general, as well as higher math and science test scores. “Therefore, if you have a child whose birthday is just prior to the cutoff date, it is often smarter to have that child wait another year, unless your child is academically and socially mature,” Fitch suggests. Make sure that your budding student has both the social skills and the academic skills to make it in kindergarten before pushing him ahead; a brilliant kid who is socially immature may do better with an extra year of maturity under his belt before starting kindergarten.

At the same time, other studies have shown that these children may benefit more from starting kindergarten early, assuming that they wo be taking part in a high-quality preschool otherwise. So if you’re thinking about “redshirting” your child, consider a preschool in your area with a reputation for excellence.

What Does This Mean for Parents?

So how should this research impact your choice regarding whether to push your child ahead or hold him back? “If a child is academically ready, and socially on track, that child should be ready for kindergarten and do well in the classroom setting and with the work,” Fitch says. “If a child seems to be behind his/her peers socially, then parents should strongly consider if the child may do better with another year of pre-k to mature.”

But what if parents are still not sure about whether their kids are more or less mature than their peers, or whether they can handle the level of work that they’ll be getting? Here are a couple of tips you can use to figure out where your child would fit in the best: