How to Raise a Silver Palate 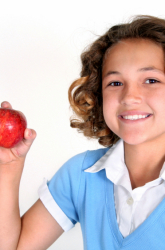 A child's life is full of discovery. And one of the primary places that discovery happens is on their dinner plate. Textures, colors, tastes, smells, and even a few rare sounds – food satisfies all the senses in the body at once. Talk about sensory paradise! So with all these new experiences for kids to literally sink their teeth into, why do they insist on the same macaroni and cheese for months on end?

Truth is, children often turn up their noses at foods just because they can. It's part of the power game – they need to feel they have some control over their bodies. Parents may get to take care of the outside with all that washing and dressing, but many kids figure that they can decide what goes on the inside. So they lock their jaws shut with an innate strength only a crocodile could admire, barring all entry.

Despite the struggle, the nutrition wars are worth the effort. Trying new foods can foster the timid to broaden their horizons and give them a safe arena to experiment and discover the world. As a parent, you can facilitate that exploration. It all comes down to how you present things. Here are three suggestions for getting your child to push the peanut butter and jelly sandwich envelope:

Next Article: Small Steps can Reduce Childhood Obesity
We enable strictly necessary cookies to give you the best possible experience on Education.com.Cookie policy