Log in with different email
For more assistance contact customer service
Outside the Classroom
Cell Phones, Children, and Teens
OMG, Teens and Their Phones

OMG, Teens and Their Phones 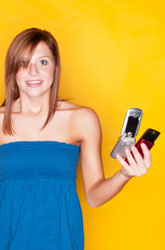 The statistic was so stark, spoke so loudly, that it almost HAD to be wrong.

At a recent session organized to share information about kids in our digital world, FCC Chairman Julius Genachowski quickly threw out this stunner: The average teen sends one text message every 10 minutes while awake.

One of the panelists at that Washington, D.C. forum, Stephen Balkam, reassured the statistic was, in fact, incorrect. "Phew!" you might be thinking. But not so fast. Balkam, president of the Family Online Safety Institute, said the real figure is actually higher.

A recent survey showed the average teen texts about 200 times a day, he explained. Divide that into a 16-hour day and you end up with one text every five minutes.

So the obvious question is whether the almost hypnotic attraction of so much digital technology available to kids - whether it's texting, playing online games with people throughout the world or making and breaking up with new best friends forever on social media forums like Facebook - is being abused by our kids?

The answer, according to Balkam and Caroline Knorr, parenting expert for Common Sense Media, is yes. But only if parents let it happen.

"We strongly urge parents to do their own homework," said Balkam. Parental involvement is the key, said Genachowski. "We can't ignore the new risks technology creates. I think more and more parents have to develop a better sense of how to find the answers."

Parents must do two things, Genachowski, Knorr and Balkam agreed. The first is to understand any technology in the hands of their kids rather than simply writing it off and being ok with that ignorance when it comes to the tech-filled world of teens. That can be difficult for many parents, but don't be afraid to turn to your kids for help.

"Look, this technology is not going away," said Balkam. "We live in a digital world. It's humbling, but maybe sometimes you'll have to ask your kid to show you what they are doing to help you understand the technology. But that can be a good thing and lead to a positive interaction with your kids."

In addition to understanding your teen's technology, the second thing parents should do is to create rules about the use of cell phones, computers and anything other type of digital technology. Set rules and guidelines specific to your child's needs and your needs as well, and make sure that the rules aren't so unreasonable tha they won't be followed.

When it comes to embracing your teen (and their cell phone) there are a few simple things you can do to make sure that they're not abusing the technology available to them in the palm of their hand. Knorr, Balkam and Genachowski offered the following suggestions for parents:

All parents should have a sit-down with their kids about digital technology. "Really talk to kids about responsible usage and make sure they are listening," Knorr said. Set rules and explain to your kids why the rules are in place and why they're beneficial.

"There's no perfect way to do this," said Balkam. "We're all making this up as we go along . . . (But) one of the most important things a parent can do is to create structure and boundaries for their kids." In the end, the understanding the technology they use will help you better understand the world they live in and the language they speak, and ultimately, will help you better understand how to make sure they're not abusing the power of all that's at their fingertips.

Next Article: Is Background TV Killing Kids' Concentration?
We enable strictly necessary cookies to give you the best possible experience on Education.com.Cookie policy