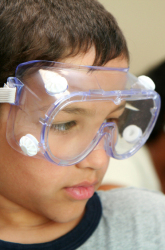 Creating a safer and better life for their children is the reason many immigrants continue to migrate to this country. After all, it's the American dream: education, opportunity, and the chance for a new life. And the impact on schools, not to mention society as a whole, is far reaching. Consider the facts from the Center for Immigration Studies in Washington D.C.:

So what exactly is the status of newly immigrated or undocumented children? Some may not know it, but every child within U.S. borders has a right to a free education, social security number or no. In the 1982 Plyler v. Doe case, the United States Supreme Court ruled it was against the law to deny enrollment to undocumented students. As a result of this landmark case, public schools:

In spite of this ruling, the issue of documentation remains complex. Knowingly or unwittingly, school administrations sometimes ask for current driver's licenses or state identification cards as proof of district residency, and social security numbers are commonly used for identification. This practice can discourage immigrant parents from registering their children for school.

However, wary parents should know that there are alternative forms that can be submitted. In lieu of a birth certificate, the person enrolling may provide a sworn statement setting forth the child's age. And if the required immunizations are not completed, the student may still be admitted with a written schedule to complete the remaining doses within 90 days. For more information on the required documents, including how to cut through the red tape, parents should consult their State Department of Education website.

As the controversy over immigration laws wages on, schools are already knee-deep in the process of leaving no child behind. And that includes those of an immigrant population that shows no signs of slowing its rapid growth.

Next Article: Factoring in the Achievement Gap
We enable strictly necessary cookies to give you the best possible experience on Education.com.Cookie policy