Log in with different email
For more assistance contact customer service
Outside the Classroom
Citizenship
International Day of Democracy: Ways to Celebrate at Home

International Day of Democracy: Ways to Celebrate at Home 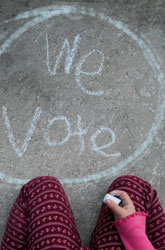 The idea of representative government might seem like a yawn fest to your kids, but they might be surprised to know that people their own age were behind some of the biggest democratic movements in recent memory. The United Nations’ 4th International Day of Democracy on September 15th aims to commemorate the efforts of those young people, assess the outlook of democracy, and support the democratic ideal across the world through this year’s theme:  “Peace and Democracy:  Make Your Voice Heard.”

In 2011, according to UN Secretary-General Ban Ki-moon, “The world saw the truth of the saying that countries do not become fit for democracy; they become fit through democracy. Young people, above all, brought home this message.” You can bring that message home to your kids this September 15th with these ideas for instilling the spirit of democracy:

What if you let your children play their stereo at the highest possible decibel level all night, or never made them do house chores? Kids may giggle at the possibilities, but even they’ll understand why it’s important to have rules for the common good—and why it’s equally important that everyone gets a say in creating them. To celebrate IDD, convene a family council and democratically draw up some ground rules for your home. Be sure to let your youngest children participate, and take them seriously in the process.

If your older kids exercise their independence and question your rationale behind a rule suggestion, try to take it in stride and avoid “because I said so” explanations—remember, questioning authority is part of the democratic process! Kids that have a share in setting their own guidelines are less likely to break them, and soliciting their opinions can make for a much more peaceful home.

Local Democracy: Write a Letter or Attend a Meeting/Rally

Got a dangerous intersection that could use a crosswalk in your neighborhood? Don’t like the way your local playground is cared for? Help your kids find an issue that means something to them and guide them in finding a local representative who can help. Representation is the heart of democracy—your elected officials are here to represent their constituency, and kids are not too young to make a difference.

Attending a meeting or rally is another good way to get your child in on the democratic process, especially if it’s for a cause close to him like a school board meeting or a demonstration to save your local library. If possible, help your older child prepare something to say if citizens are given the opportunity to speak out. When kids know they can be taken seriously, they are more apt to take an interest in their rights as citizens later on in life.

National Democracy: Be President for a Day

What’s it like to be the President? Young children can find out on pbs.org’s

President for a Day

game. They’ll make choices that range from the mundane (deciding whether to spend the morning jogging a la Clinton or golfing like President Regan) to the more complex (brief with the Deputy Director of the CIA or meet with a representative from Arizona). If older kids want a crack at being the leader of the free world, the simulation games

(Positech Games) offer them the chance to choose a nation, develop policy, influence the body politic and attempt to balance the budget, all while maintaining the support of the voters. IDD is a great day to discover that being a leader is much harder than it looks—and that a modern democracy is tremendously complicated.

Global Democracy: Start or Participate in a Movement

12-year-old Craig Kielburger began in 1995 with 11 friends and a mission:  to fight child labor across the world. He had seen a news story about a young Pakistani boy murdered for speaking out against child labor; over 15 years later, his charity is the biggest children-helping-children organization and partners with the UN and Oprah Winfrey’s Angel Network. In its own words, the organization “inspires young people to develop as socially conscious global citizens and become agents of change for their peers around the world.” Kielburger was only 12 when he began, hardly knowing what child labor meant. He is living proof that kids aren’t powerless against the injustices of the world. Encourage your kids to start their own crusades for change or join an existing movement to bring forth a more democratic world.

“On this International Day of Democracy,” says Ban in his 2011 IDD message, “let us redouble our efforts to support all people, in particular the young – the drivers of this year’s momentous events – in making democracy a working reality.” Honor democracy in your home and neighborhood by teaching your kids that they too can make a difference.