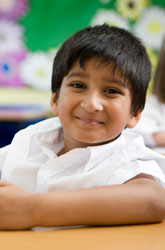 Who ever said school is supposed to be fun? Sit a granddaughter down with her grandmother, and chances are the grandmother will talk about how much harder she had it growing up. School wasn’t just a bunch of fun and games. There was no such thing as recess or home living center. There was sitting quietly, listening to the teacher, doing your schoolwork, and then going home to do chores.

Somewhere along the way, though, we realized we could make the process of learning fun. It wasn’t necessary for school to be just about rote memorization, mind-bending repetition, or teachers tapping sticks against chalkboards. It could be exciting and engaging!

But what if the way they did it way back when was actually right?

David Geary, Ph.D., a professor of psychological sciences at the University of Missouri, published a paper in the Educational Psychologist this summer exploring this topic. Specifically, he explores what he calls “evolutionary educational psychology,” which is the connection between evolution, culture, and learning.

Geary summarizes his theory this way: “The gist of it is that if we think about modern-day education, there are some skills that are learned easily by kids whether or not they have formal schooling, and some skills only emerge with direct instruction from schooling.” For example, he explains, speaking is a skill that most children learn naturally without formal instruction, whereas reading and writing are skills that require instruction.

Geary explains that as society becomes increasingly different, we add more cultural innovations, and we then ask our children to learn more evolutionary novel ideas and skills. “And learning these things doesn’t come easily to kids because there’s not a biological motivation to learn them,” he says. “The motivation to engage in reading and writing is just not there for many kids.”

Some parents are likely to be skeptical of this—for example, those with kindergarteners who are just now beginning to enthusiastically write, “I love, mom,” proudly presenting the words in 5-year-old chicken scratch on folded pieces of construction paper covered in red hearts.

Geary’s paper did not go without debate. In fact, an entire issue of the Educational Psychologist was devoted to exploring and responding to Geary’s theory in 2008. David Bjorklund, Ph.D., a psychology professor at Florida Atlantic University, researches cognitive development and evolutionary developmental psychology. “From my perspective, he has not taken an extreme perspective,” Bjorklund says of Geary. “Some of the responses were harsh, and some of the other responses were very positive. Some thought the approach may be a little premature—that we may not know enough about cognitive development to make these conclusions.”

Bjorklund explains that if researchers have trouble with Geary’s approach it’s because of their beliefs about appropriate learning environments for children. For example, he says, some who have an evolutionary orientation would say we should take advantage of children’s natural motivations—that children’s own motivation to learn higher math, for example, or world history, will take over when they are ready to learn. “This is the extreme perspective of ‘let kids be and they’ll learn what they want to learn,’” Bjorklund says. “The other perspective is that kids have nice human brains and we have to shape them from scratch—that we have to take advantage of these so-called evolved processes. It’s more of a rigorous approach to learning.”

Geary’s perspective falls somewhere in the middle of the two extremes. Yet, he argues his theory does have implications for teaching and learning. “If you look at international studies, the U.S. lags behind the other modern industrial economies,” Geary says. “Why? There are a number of reasons, but the trend in some areas is to want kids to discover things for themselves. I like the idea, but I don’t think it’s going to happen without strong teacher guidance. Children need a well-organized integrated explicit instruction because there’s no evolutionary history that has prepared them to learn in these novel domains that are a result of cultural innovation.”

And like Geary’s perspective falls somewhere in the middle, so do the perspectives of many teachers out there. In kindergarten classrooms, for instance, teachers may be using an explicit teacher-directed approach to learning “cultural inventions” such as reading, writing, using Arabic numerals, etc., while still having child-directed learning centers where curiosity and exploration are encouraged.

As Geary says, it’s not always going to be fun, but that doesn’t mean it will never be fun!

Next Article: The Khan Academy: Changing the Face of Education?
We enable strictly necessary cookies to give you the best possible experience on Education.com.Cookie policy