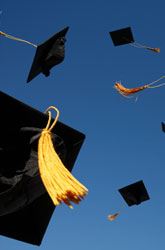 This spring, millions of capped and gowned kids will proudly cross stages all over America in celebration of their academic achievements. But how much do you know about the origin of these traditions? Try our quiz below and find out:

1. An early version of the mortarboard, or cap worn by grads, was worn in the Middle Ages by A.) the nobility B.) the clergy C.) the military

2. Some researchers speculate that the robes of early scholars were black in order to A.) disguise ink stains B.) symbolize the death of the old self C.) mimic the dress of the nobility

3. “Pomp and Circumstance” was not originally meant for graduation; in fact, one of its earliest performances was for A.) a wedding B.) a coronation C.) a funeral

4. Diplomas were originally made of A.) rawhide B.) moleskin C.) sheepskin

Need a refresher course? Read on to learn about the history behind some of our most time-honored graduation traditions.

Though the mortarboard is one of the most recognizable trappings of academic achievement in modern times, even your Kindergartener's cardstock and paste rendition of it would probably have been recognizable to medieval scholars because of its telltale shape. Though its earliest origins are somewhat murky, the close-fitting bottom part of the mortarboard probably derives from the skull caps worn by early medieval clerics to protect their tonsured heads. Later, the style was adopted by scholars at England's Cambridge and Oxford, and the biretta became one of several insignia conferred upon academic dignitaries.

The caps were sometimes worn with tufts on top, which find their contemporary equivalent in the tassel, which we now move from right to left to signify a change in academic status. The meaning of the odd square shape is still debated by scholars; some say it represents the books (which in medieval pre-backpack times were occasionally carried upon the unfortunate scholar's head!).

Your senior boy may balk at having to wear a "dress" for graduation, but assure him that it too is part of a tradition that stretches back hundreds of years. Medieval classrooms were cold and damp, a far cry from the modern temperature-controlled and technology-equipped buildings that students of today enjoy. To protect themselves from the elements, scholars wore long, loose robes over their clothes. As guild system grew into the medieval university, gowns evolved in color and style to represent the branches of study pursued by their wearers.

Traditionally, the gowns are black--perhaps to represent the sobriety of academic study, but many scholars speculate that the black material might have had something to do with disguising the ink stains produced by such diligent scholarship. By the late 19th century, specific colors were adopted for the various academic disciplines—most of these manifest themselves in the special hoods worn at college graduations.

Most kids know it as the "graduation song," but Sir Edward Elgar's "Pomp and Circumstance March No. 1 in D" is actually just one part of his Pomp and Circumstance Military Marches, Op. 39. They were all written around the turn of the 20th century, and when Elgar was honored with an honorary doctorate by Yale in 1905, the "Land of Hope and Glory" trio section of the first march was played as a recessional. The tradition stuck, and over 100 years later it is the gold standard for both graduation processionals and recessionals. Though the song was inspired by lines from Shakespeare's Othello and played at the coronation ceremonies of King Edward VII, it will forever be associated with alphabetized rows of fresh-faced grads for most of us.

You may have heard people talk about hanging their “sheepskin” on their office walls. Some sort of bizarre cult ritual? Believe it or not, sheepskin—far more durable than fragile paper of the time—was originally used for diplomas. Diplomas used to be written by hand, akin to the beautiful fonts and calligraphy we see today in their modern counterparts. By the beginning of the 20th century, parchment became the standard for diplomas. Some of the older, more traditional colleges still use sheepskin and painstakingly handwritten Latin on their diploma, but now most of them are simply printed on ordinary A4 size paper.

Many of these traditions are so steeped in our collective consciousness that we don’t think to bat an eye when kids queue up for “Pomp and Circumstance” or move their tassels from right to left, but understanding the long, proud history of graduation truly underscores just what a momentous occasion it is.

Next Article: The College Tour: What You Need to Know
We enable strictly necessary cookies to give you the best possible experience on Education.com.Cookie policy