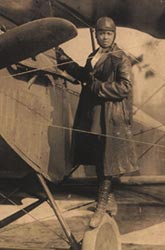 Martin Luther King, Jr. Booker T. Washington. Harriet Tubman. These African-Americans have become household names and their contributions to our nation cannot be overestimated. But there are so many other African-Americans who made important contributions to society whose names are often overlooked in the history books. February marks Black History Month; read up on some lesser-known figures in African-American history and celebrate the legacy of a better America that they have left behind.

While more people are familiar with his contemporary Frederick Douglass, William Wells Brown was as prominent an African-American in his own right. Author, lecturer and abolitionist, he is perhaps best known as the first African-American novelist and the first published African-American playwright. Many of his writings had abolitionist themes and he did much to support the African-American cause in the latter part of the 19th century. Born into slavery, Brown died a prolific author, a free man, and a champion of human rights.

If Shirley Chisholm had her way, it would be her name and not Barack Obama’s associated with the title of first African-American president—Chisholm, the first black woman elected to Congress, ran for the Democratic nomination in 1972. Though she lost her bid for the presidential ticket, Chisholm represented New York’s 12th Congressional District for seven terms and was an influential figure in politics for years to come. Her campaign slogan, “Unbought and Unbossed,” represents the independence for which she was known.

Edward Bouchet’s educational opportunities were indeed limited—there being only three elementary schools in his native New Haven that accepted black pupils in the mid-nineteenth century—but that didn’t keep him from pursuing his education right on up through Yale’s hallowed halls and becoming the sixth American of any race to get a Ph.D. in physics and the first African-American to earn a doctoral degree. A physics degree should have guaranteed Bouchet a university position, but segregation closed this door to him. Undeterred, Bouchet taught for 26 years at the Institute for Colored Youth where he inspired generations of other young black adults to achieve their dreams.

Born the seventeenth child of a sharecropper in 1882, James Winkfield grew up in Kentucky’s celebrated horse country. The slender, slight stable boy who could ride bareback by the age of seven soon attracted the attention of the horse racing community, and by the 1890s Jimmy was already winning races. After winning two successive Kentucky Derby races in 1901 and 1902 Winkfield was at the top of his game—but when Winkfield was crowded out of a 3rd Derby win in 1903 and racial tensions in the country were running high, he left the United States. He went on to become an international jockey in Europe until wars interrupted his success. Though his career was fraught with pitfalls, Winkfield is remembered as one of the greats in the racing world.

Bessie Coleman was the world’s first licensed black civil aviator. The outbreak of World War I lead to Coleman’s interest in aviation, and, noting the more liberal attitudes of Europeans to women of color, she traveled to France in 1921 to earn her international pilot’s license. After returning to the United States she became famous as an instructor and stunt flyer. Her dream was to open a flying school for African-Americans; tragically, Coleman died before this could happen. Her 1926 death during an air show practice stunned and saddened the public, and the grave of “Brave Bessie” is honored to this day with an annual flyover.

Cathay Williams, daughter of a slave woman and a free black, was the first documented African-American woman to enlist and serve in the U.S. Army. After being liberated during the Civil War, she served as a laundress and cook in the Union Army. As life in the post-war 1860’s for a black woman was still fairly grim, she chose to enhance her prospects by posing as a man—William Cathay. Under her masculine pseudonym she enlisted in the 38th U.S. Infantry (following what must have been a very hasty physical examination) and went on to become America’s first female African-American Buffalo Soldier.

Micheaux, a pioneer filmmaker of the early to mid-20th century, was the first African-American to produce a full-length film. Born to a solidly middle class family in 1884, Micheaux worked as a railway porter, a coal miner and a rancher before turning to writing. In 1917 he wrote a book (the semi-autobiographical novel The Homesteader), and in 1919, the same year he formed his own motion picture company, he turned this book into a film. This was followed up by over 40 feature-length films, an output that spanned a three-decade career in writing, producing and directing. The Producers Guild of America has called him “the most prolific black—if not most prolific independent—filmmaker in American cinema.”

These men and women paved the way for today’s African-American luminaries: before there was Dr. Mae Jemison aboard the space shuttle as the first black female astronaut, there was Bessie Coleman in her biplane. Spike Lee cites Oscar Micheaux as an inspiration. Let their stories inspire you to accomplish what they did: success in the face of sometimes overwhelming odds.