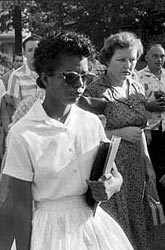 “I have a dream . . . .” Most of us recognize the rhetoric behind the Civil Rights Movement. But behind these famous quotes were men and women of action. Honor the rich heritage of these African-American leaders by transforming their words and deeds into personal life lessons for both you and your child.

Thurgood Marshall: “What is the quality of your intent?”

The story: In 1930, Thurgood Marshall was denied entrance to the University of Maryland because of his race. Undeterred, Marshall graduated instead from Howard University’s law school, became the Chief Counsel for the National Association for the Advancement of Colored People (NAACP), and in 1954 argued the landmark Brown vs. Board of Education of Topeka case to the highest judicial body in the nation, later becoming the first African-American to sit on that Court.

The lesson: To help your children put Thurgood Marshall’s remarkable persistence into action, help them with their goal-setting. Have them determine something worth pursuing, first of all—and whether your daughter is trying to make the soccer team or your son is trying to get his Eagle Scout award, goal-setting is an important part of turning success into a routine. Break down long-term goals into smaller, more manageable steps, and most importantly, don’t be afraid of discussing potential setbacks or roadblocks and how to turn them into assets: after all, Marshall’s inability to gain admission to the University of Maryland sparked a lifetime of triumphantly championing Constitutional equality for all.

Little Rock Nine (Ernest Green): “We realized in 1957 that this was not an easy journey. It was one in which we thought we were simply exercising our right to the best education that was available in Little Rock, Arkansas.”

The story: The year was 1957 and three years after the groundbreaking Brown vs. Board of Education case, the Little Rock schools were beginning the process of desegregation. Contrary to a federal court mandate, Arkansas Governor Orval Faubus ordered the Arkansas National Guard to prevent Ernest Green, Elizabeth Eckford, Terrence Roberts, Jefferson Thomas, Minnijean Brown, Carlotta Walls LaNier, Gloria Ray Karlmark, Melba Beals and Themla Mothershed from entering the all-white Little Rock Central High. This prompted President Eisenhower to force integration; the 101st Airborne Division of the U.S. National Guard then escorted the Little Rock Nine to school on September 25, 1957, where they would brave physical, emotional and psychological abuse from many of their white classmates and community members for the next year as they stood together for equality.

The lesson: The Little Rock Nine exemplified courage in the face of overwhelming odds. Fortunately, everyday courage doesn’t have to mean physical or emotional endangerment under such duress. Encourage your child to do something outside the realm of his or her comfort zone daily. Even simple, low-risk activities like sitting by someone new on the playground or volunteering an answer in class can be very empowering for children. Little, daily victories can help children to build up their self-esteem for those character-testing decisions down the road that might require real moral courage.

Martin Luther King, Jr.: “Now, I say to you today my friends, even though we face the difficulties of today and tomorrow, I still have a dream.”

The story: The most prominent civil rights activist of the 20th century, MLK is remembered for his passionate rhetoric and uncompromising belief in a future in which, as he said, his “four little children will one day live in a nation where they will not be judged by the color of their skin, but by the content of their character.” To believe this in the wake of Jim Crow laws and a nation violently polarized over the issue of racial equality must have been difficult enough, but King acted upon that dream by speaking out—and sadly, he paid the ultimate price for it when he was assassinated in 1968.

The lesson: Especially in times like these, optimism like MLK’s can be difficult. Children are often acutely aware of the pressures of today’s world, both in their own lives and in the lives of their adult role models. Small but significant changes in their day can help them with a more positive outlook on life. Start with their bodies: kids are naturally more cheerful when they are well rested and exercise on a regular basis. Other tricks for increasing positive vibes are listening to upbeat music, keeping a list of encouraging motivational quotes handy (consider using sticky notes and posting them in conspicuous places), and avoiding the company of negative people. Help them to take a personal happiness inventory of the good things in their lives—the old adage “count your blessings” still has merit.

Septima Poinsette Clark: “The greatest evil in our country today is not racism, but ignorance.”

The story: Clark, regarded now as one of the mothers of the Civil Rights Movement, was fired from her teaching job in 1956 after some thirty years in education because she refused to quit the NAACP. She became a full-time activist for civil rights and her “citizenship schools” changed the face of the movement. In the 1960s, Clark’s educational campaign in the Deep South not only assisted with black voter registration but trained teachers and educated Southern blacks in life skills and literacy. To Clark, education was a form of empowerment. Her citizenship school program grew, and African-Americans once disenfranchised from civic life by racial barriers found their collective voice.

The lesson:Septima Poinsette Clark, who held a bachelor’s, a master’s and an honorary Ph.D., saw education as a bridge to a more just and equitable world. Help your kid take advantage of educational opportunities available to them. Elective courses and community education via the public library or local college are one way to do this. But even small things, like simply encouraging your child to read on a daily basis—and modeling this practice yourself—can set the bar for lifelong learning in your home. To give the gift of education to others, younger kids might hold a book drive; older children can volunteer to read to younger kids or participate as tutors in multigenerational adult literacy programs.

Celebrating the accomplishments of African-Americans merely by reading about them does a great disservice to the legacy of those blacks who acted upon the power of their convictions, even when it cost them dearly. Help your children put words into action and turn this Black History Month into more than just another history lesson.

Next Article: Learn About Black History: Seven Lesser-Known Figures
We enable strictly necessary cookies to give you the best possible experience on Education.com.Cookie policy