Making Friends in a New City 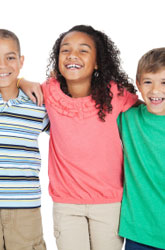 The U.S. Census Bureau estimates that 37.5 million people—12%of Americans—moved to a new town in 2010. That included 4.8 million children.

Even if it's for a great reason like buying a larger house or relocating near a better job, moving is tough. It’s common for families to schedule moves during the summer months, when their children don't have to deal with the extra stress of starting a new school in the middle of the year.

"The parents have the control over the move," child and family therapist Andie Weiner says. "We have to think about what we can do to make this transition as easy as possible."

Perhaps the hardest thing about a move is leaving old friends and starting over in a new environment. At this time, helping your children form new groups of friends will make the transition easier for everyone. Child psychologist Sylvia Rimm suggests setting a positive tone with your child by emphasizing what he can look forward to. Before the move, you can go online together and check out a map of the area you will soon call home, or look at the school’s website. Get him excited about activities at his new school, whether it’s the drama club or a big playground.

Here are nine more ideas to get kids excited about making new friends after moving:

Remember that it might take kids longer than you think to adjust to a new home. "There could be some stresses and anxiety for several months," Oesterreich says. "It could even be a year."

Weiner adds that it's important to check in with your child every so often to see how he’s handling the move. Knowing that you support and understand him, even when no one else does, can make a world of difference.

Next Article: Raising an Introvert in an Extroverted World
We enable strictly necessary cookies to give you the best possible experience on Education.com.Cookie policy