Log in with different email
For more assistance contact customer service
Parenting and Families
Moving With Kids: 9 Tips for a Smooth Move

Moving With Kids: 9 Tips for a Smooth Move 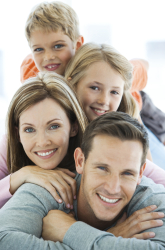 Moving with kids? Welcome to insanity. But planning ahead can make the difference between resent and a positive attitude towards the move, says Dr. Thomas Olkowski, author of Moving With Children: A Parent’s Guide. Here’s how!

Pack smart. You don’t want boxes to take over your home while you’re packing, leaving your kid feeling cramped and stretching out the transition period. Instead, start by packing the items that affect your kid as little as possible, and try to do it when she’s at school or in bed. If possible, pack items from closets, attics, and other “unseen” areas first. Once these areas are cleared, you can use them as storage spaces for boxes.

Don’t keep the move a secret. “Some parents try to keep the move a secret, thinking they are protecting the kids,” says Olkowski. “It will be a bigger shock to them if they hear about it from a neighbor or relative.” So tell your kid, but don’t overdo it. Making promises like “you’ll love it” or “the move is really fun” isn’t fair.

Encourage a team mentality. “Teamwork is one of the vital issues to a good move,” says Olkowski. “Getting the kids involved in things they can manage will help them better understand the move and have a more positive attitude toward it.” Even preschoolers can help by sorting through their toys and clothes to find items that are broken or outgrown. They can pack toys and out-of-season clothing as well. Slightly older children can pack up their rooms, with a bit of help. Yes, it will take longer than if you did it alone, but isn’t a cooperative kid worth the extra hour of packing?

Let your kid “own” her own boxes. Is your child scared that her special doggy will get lost during the move? You can allay this fear by letting her pack at least one box with her most important belongings—her blanket, doll, special teddy bear, or favorite toy. She can mark this box, as well as the other boxes that belong in their room, with stickers or crayons. On the day of the move, you’ll be able to easily find the decorated boxes, even if the movers place them in the wrong room.

Use babysitters wisely. If you have family members or neighbors who can watch your kid periodically so that you can pack, take advantage. Be aware, however, that your kid won’t appreciate getting exiled to the neighbor’s house every Sunday for several weeks before the move. On the day of the move itself, get a babysitter. “Having someone watch the kids during the moving process can help keep them calm and involved, but also keep them from being underfoot and possibly in danger,” says Olkowski.

Keep food around on moving day. Sure, you might be too busy to eat lunch, but you can bet that your kid won’t be. Prepare a bag with plenty of snacks, PB&J, premade lunches, cups, and napkins. Keeping your kid’s tummy from rumbling will make them happier and more cooperative on the big day.

Prioritize your kid’s stuff. If your mover is willing, ask to have your kid’s furniture unpacked first, as well as those decorated boxes. Doing so will give her a place to hang out and something to do (like start unpacking!) while the movers are dealing with the rest of the furniture and boxes.

Don’t forget the toys. It’s easy to get caught up in unpacking the kitchen … the bedrooms … the bathrooms … and leaving the toys in their boxes. Don’t fall into this trap. Your kid will want plenty of entertainment in the days after the move while you get the house in order, so unpack the playroom relatively early in the process.

Keep it in perspective. There are boxes all over the house! You’d like nothing more than to sit your kid in front of the television all day until every last box is unpacked. But keep in mind that you can prevent frustration and misbehavior if you schedule slots of parent-child time following the move. It’s not the end of the world if you don’t organize the boxes of out-of-season clothes or set up the bookshelves until a week or two after you move in.