Log in with different email
For more assistance contact customer service
Outside the Classroom
Television, Children, and Teens
Must-See TV for Preschoolers and Kindergarteners

Must-See TV for Preschoolers and Kindergarteners 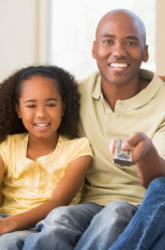 Whether it’s an impromptu game of freeze tag in the yard, or a free-form playdough sculpture contest, kids love to play. Parents of preschoolers and kindergarteners know that screen-free, battery-free play is best. But there are bound to be days when the TV beckons. Good news: with more and more quality television available, you don’t need to feel guilty about letting kids indulge every now and then. Should you choose Saturday cartoons or Sesame Street? We asked two experts, Deborah Linebarger, Ph.D., Assistant Professor at the University of Pennsylvania’s Annenberg School for Communication and director of the Children’s Media Lab, and Betsy Bozdech, Executive Editor of Common Sense Media, which shows they thought were Must See TV for preschoolers and kindergarteners.

Best TV for Preschoolers: Preschool plants the seeds for kindergarten, and TV can help, says Linebarger. “Research suggests that preschoolers develop story skills (like the ability to accurately sequence a story and identify its central content) and narrative skills (including an ability to identify key story events and make inferences about those events) by watching narrative-style programs,” she says. They also learn the style elements that make up written text, like compare/contrast, cause and effect, and description. “It’s good to get this type of exposure,” she says, “Because when kids transition from learning to read, to reading to learn, they have to be able to glean information from texts that are expository-based.” Without experience, this is a tough leap. For preschoolers, “interactivity” is another key thing to look for in a TV program, Bozdech says. “Characters will engage young viewers by asking direct questions and enlisting their ‘help’ and asking them to think of solutions. The reason that factor is so important is that it's the closest thing to interacting with a real person (like Mom or Dad!) -- which is still the ideal whenever possible, of course,” she says.

Best TV for Kindergarteners: As kids get slightly older, they get savvier, too. That’s why it’s important when you’re talking about kindergarten kids to find shows that mix educational content with fun, engaging storylines and characters. “No kid wants to be 'talked at,' so integrating story and education smoothly is important,” Bozdech says. You can have a tremendous amount of learning happening without a show feeling like a lesson. This age is about making the transition to formal schooling, so it’s particularly useful for kids to watch programs that talk about, or are set in, schools. “That helps kids learn the conventions and get a sense of what school might be like,” Linebarger says. Most of the programs below also feature story lines that deal with school-related issues and social and emotional conflicts. “Watching and discussing these shows can be a way for parents to connect with their now school-age kids and help to evaluate whether and what their kids are experiencing in formal schooling,” Linebarger says.

In addition to monitoring what your kids watch, it's also important parents take note of how they're kids are watching TV. Linebarger has spent the past six years studying the impact of television use on language development, social development, and academic outcomes in children. “While watching TV doesn’t appear to be harmful,” she says, "there are some very important things to keep in mind." Here are her top six essentials:

Whichever programs you choose, be sure to limit the amount of time kids spend in front of the tube. The American Academy of Pediatrics recommends no screen time at all for kids under the age of two, and no more than 1-2 hours a day for children older than that. That includes all screen time -- computers, TV, DVDs, and video games. Be sure that kids are getting plenty of time to explore outside, think creatively, and play.

What about those zombies on the couch? “I know parents get concerned when their kids are so involved in a program that they don’t hear parents asking them questions,” Linebarger says. “But when your kid looks like a zombie it’s actually a good thing! It means that they are in a state of focused attention and this type of attention is associated with learning.”

Next Article: Is SpongeBob Bad for Your Preschooler's Brain?
We enable strictly necessary cookies to give you the best possible experience on Education.com.Cookie policy