The Sex Talk at Every Age 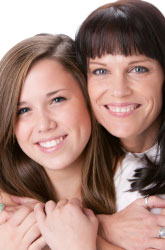 When we were in school, sex education was on a "need-to-know" basis. The teacher spent a few minutes stuttering through the basic birds and bees, leaving the students with little more than an overwhelming sense of embarrassment and a few basics routinely taught at weekend sleepovers. But the times are a-changing.

In January 2012, The National Sexuality Education Standards (NSES) released the nation's new bench marks for sexual education. Today's sex ed will discuss much more, much earlier. Topics like bullying, gender identity and body image issues are included to engage kids by talking about what they need and want to know. Opening an early dialogue at school helps cure some of the taboo and embarrassment that may keep your child from asking for help later on down the line. Here are a few of the topics your kid should expect to learn about in class, and tips for kickstarting these conversations at home.

Taking a cue from the national standards can mean opening important lines of communication that may last a lifetime. Keep your cool and sense of humor and he'll learn that you're someone he can confide in, no matter what's going on. The NSES says, "The most effective strategy is a strategic and coordinated approach to health that includes family and community involvement."

The benefits of knowledge, family dialogue and self-confidence don't stop at home. The NSES's studies show that "academic achievement and the health status of students are interrelated." Give him the tools to make healthy decisions and he'll be well on his way to succeeding at school and in life.