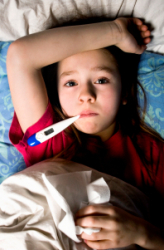 If you’ve got kids, you probably spend at least a portion of the winter battling cold and flu symptoms. On average, kids get between eight and 10 colds each and every year. And chances are that you’ll get your fair share of the sniffles as well. Before you reach for the decongestant, though, consider some natural cold remedies. While the only cure for the common cold is time, a few simple strategies can offer comfort and speed up recovery.

Offer warm drinks and soups. Your ill child probably won’t feel like eating much, but encourage she to drink fluids to relieve symptoms and prevent dehydration. Warm chamomile tea clears coughs and congestion, reduces fever and helps kids relax so they can sleep, says Dr. Ivy Branin, a naturopathic doctor in New York City. Offer chamomile tea several times per day for the duration of the illness, and especially before bedtime. And don’t forget grandma’s remedy, chicken soup. Turns out she was right about its miraculous properties. Chicken soup has anti-inflammatory properties, according to the Mayo Clinic. It also thins mucous, reducing congestion. Best of all, it’s comforting and delicious. Throw together a pot of soothing chicken soup and make enough for leftovers the next day.

Avoid mucous-producing foods. Dairy, citrus, gluten and bananas are known to increase mucous production, so these foods are best avoided, says Dr. Branin. Instead, offer light, comforting foods, such as broths, juices or oatmeal, which reduce mucous. Let your child’s natural hunger signals determine when and how much she eats.

Give honey instead of decongestants. If your child’s cough is causing you both to lose sleep, reach for a spoonful of honey instead of an over-the-counter cough syrup. One study from Penn State University found that children who were given a teaspoon of honey before bedtime had significantly less coughing and sleep disruption than children who were given a decongestant or a placebo. Offer the honey 30 minutes before bedtime. Honey works by soothing and coating the throat. Honey also has antibacterial properties that can promote healing. Remember, though, honey might cause botulism in young children with immature immune systems. Never offer honey to a child younger than 1 year.

Rub away nasal congestion. Commercial chest rubs are effective, but they sure don’t smell very good. Essential oils relieve congestion just as well and can promote relaxation and sleep, Dr. Branin says. Combine two drops of thyme or eucalyptus essential oil with 1 ounce of olive oil. Rub this mixture behind the ears or on the chest before bedtime. Try adding a few drops of lavender oil to your humidifier or a shower to relieve congestion, as well.

Use elderberry’s power. Elderberries grow natively throughout most of the United States and were used historically to treat a number of ailments, including colds and fevers. Current research indicates that these small purple and black berries seem to indeed have healing properties. In one study, participants who took the elderberry extract Sambucol recovered from the flu three days earlier than other participants, according to the University of Maryland Medical Center. Try a syrup or formula made specifically for children and dose according to package directions. Remember, herbal remedies can have strong pharmaceutical properties, so consult a qualified health practitioner before using any herbal remedy to treat children.

Don’t forget the value of distraction. There’s no denying the very real misery of cold and flu symptoms, but a little distraction can make those symptoms seem less acute. Pick up a few videos or books and settle in with your child for a quiet evening. Work on a new puzzle or play a board game. Kids love a little extra attention when they’re sick and these activities will make a cold seem more bearable.

Most colds resolve themselves in seven to 10 days with rest and natural cold remedies, but watch for warning signs, especially if your child is 3 months of age or younger. Call your pediatrician immediately if your child has shortness of breath or rapid breathing. Significant chest pain also requires immediate attention, as does a fever that exceeds 105 degrees, according to Dr. Jerry Rubin, co-author of Naturally Healthy Kids. Finally, pay attention to your child’s cues. A child who is lethargic or difficult to rouse needs to see a doctor immediately, but consult your doctor for any behaviors or symptoms that just don’t seem right.

Next Article: Teens and Acne: Help is on the Way
We enable strictly necessary cookies to give you the best possible experience on Education.com.Cookie policy