No Child Left Behind Revamp: What's in Store? 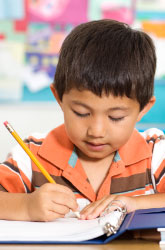 The No Child Left Behind Act (NCLB), an ambitious attempt to improve school performance and to put poor and minority students on a level playing field with all other school children, was passed 9 years ago.

President Obama made it clear earlier this year that the law will be reauthorized, but with significant changes. An exact blueprint has not been released by the White House, but Obama has already met with education experts and has announced a series of town hall meetings later this year to get more public feedback on NCLB.

The law required schools to test their students each year and then use those results to determine if schools are making annual yearly progress. Another provision of the law called for all students to be “proficient” in math and reading by the year 2014, though no real definition of proficiency was provided.

Based on some initial meetings between the administration and a variety of education officials, a few of the changes for NCLB are coming into view.

Many education experts say NCLB was well-intentioned but flawed and are cautiously optimistic about the overhaul, since all the details have not yet been released.

“They promised a sweeping overhaul and, so far, I think we’re seeing that,” said Dennis Van Roekel, president of the National Education Association, the largest teacher’s union in the country. “They are talking about eliminating pass-fail testing that’s based on annual yearly progress and eliminating the overemphasis on test scores. So far, it looks good.”

“Am I hopeful?” said Randi Weingarten, president of the American Federation of Teachers, the second-largest teacher’s union in the country. “Yes. Do I recognize there is a lot of work to be done? Absolutely.”

Weingarten, Van Roekel and other education experts said it will be important to see the details of the NCLB overhaul, as they are released by the Obama administration. But what’s clear at this point is that the NCLB unintentionally created some problems in the country’s classrooms.

The system is currently more about testing than teaching. “The teachers want to be able to reach,” Weingarten said. Instead, the focus since NCLB has been getting ready for the all-important tests. “They don’t want to spend their lives engaging in test prep,” she said. Middleton agreed: “We want children focused on learning and improvement instead of proving themselves on high-pressure tests.”

Many schools now focus on students closest to passing the tests. “When I talk to teachers, they really hate the narrowing of the curriculum,” said Van Roekel. He said in many schools, the main focus is on the group of kids who fall just below proficiency. The students who are doing very well tend to get ignored. “We have to focus on all of the learning, not just those moving close to proficiency.”

Subjects other than math and English get little attention. Because English and math are the core subjects for the testing that determines if schools are succeeding or failing, education experts say that creates an exaggerated focus on those two subjects. Weingarten said this is another way the curriculum has been narrowed for many teachers – English and math at the expense of everything else. But, as Professor Michael Middleton of the University of New Hampshire noted, “Children can be outstanding in many different ways beyond math and reading test scores.” For example, a school with a strong music program won’t be acknowledged if only math and English test scores are the focus, Middleton said.

February 15, 2010
Next Article: Categories of Skills and Abilities In Science Class
We enable strictly necessary cookies to give you the best possible experience on Education.com.Cookie policy