Log in with different email
For more assistance contact customer service
Learning and Your Child
The Definition of Autism: About to Change?

The Definition of Autism: About to Change? 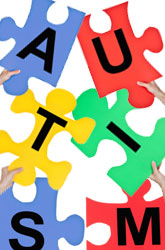 A bombshell rocked the medical community last Thursday: the American Psychiatric Association announced that a panel of experts would analyze the definition of autism for the Diagnostic and Statistical Manual of Mental Disorders, the diagnostic tome used in psychiatry. The idea of a more specific set of symptoms for diagnosing autism has some in the medical community excited about lowering the percentage of children diagnosed with the mental and social disorder—but many parents, experts and patients are crying foul.

Presently, about 1 child in every 110 children have autism or a related disorder. Austim is currently defined on a spectrum basis, which means that two children with the same diagnosis could show completely different symptoms. Because of the wide range of symptoms for autism and autism spectrum disorders (ASDs), such as Asperger's Syndrome, medical exerts suggest that autism is often misdiagnosed, which could be to blame for the high rate of diagnosis in the United States. Still, narrowing the definition for autism and ASDs could remove precious resources from individuals and families that need them the most.

The new definition of autism aims to describe the difference between individuals considered medically and mentally abnormal, and those who are simply unusual. This might exclude some of the patients who have been diagnosed with an ASD, but are able to function at a high level. Since autism and other ASDs often affect people's ability to think, interact with others and communicate effectively, individuals who seem to get along fine with a minor amount of issues could be excluded from the help specifically offered to autistic students and community members by by governments and schools.

Under the current definition of autism and ASDs, a person can be diagnosed with autism or another disorder by exhibiting 6 of 12 known behaviors. If the proposed changes are accepted—which should happen by December 2012—an individual would have to exhibit 3 communication deficits (such as not responding to his name, crying out inappropriately and failure to recognize nonverbal communication) as well as 2 types of repetitive behavior to qualify. The new parameters effectively remove Asperger's Syndrome and pervasive developmental disorder, not otherwise specified—known as P.D.D.-N.O.S.—from the manual altogether, so they wouldn't be used as industry diagnoses.

Not all mental health experts agree with the proposed changes to the definition of autism. Some, like Dr. Ernst VanBergeijk, Dean and Executive Director of the Comprehensive Transition and Postsecondary program at the New York Institute of Technology Vocational Independence Program, worries about the effect the changed definition could have on services offered for special needs students. "Lumping Asperger's syndrome and P.D.D.-N.O.S. with lower functioning individuals with autistic disorder does not create a distinctiveness necessary for research, treatment, and educational purpose," he says. "My fear is that these entities will use the new system, which appears to be weighted toward lower functioning individuals, to exclude higher functioning individuals from services. Regardless of what you label these individuals, they will need services."

However, Dr. Doug Berrian, of the Phoenix Center—a non-profit special education school for students with autism—notes that the change might not result in a complete removal of services. "We might be affected by receiving fewer students classified as being autistic. However, it could just become semantics. These kids could end up being classified as multiply disabled and still [be] eligible for special education services."

How It Affects You

The redefining of autism as a mental disorder could have serious repercussions. If you have a child with Asperger's or who's been diagnosed with P.D.D.-N.O.S., the diagnosis may no longer be recognized by the medical community or disability panels. This could result in the removal of resources and services offered to you under the current system. If your child has been diagnosed with autism, a reevaluation might be necessary to compare symptoms against the new definition, to check for qualification.

"I know there are distinct differences in the way one educates an individual with Asperger's syndrome versus even a high-functioning individual with an autistic disorder," warns VanBergeijk. "The proposed reorganization of the diagnostic categories makes the distinction less clear...Without intervention, individuals on the autism spectrum face a 90% lifetime unemployment rate."

Even if you don't have a child with autism or an ASD, you could still be affected. If your school currently has the resources to have separate classes for ASD students, those classes could be removed due to a lack of funding—meaning bigger classes and a larger spectrum of learning for a single classroom.

It's a difficult decision for the panel, who are making the choice between lowering the skyrocketing autism diagnosis rate and offering help to those who are currently defined as autistic. While it's true that many higher-functioning ASD individuals can hold jobs, have relationships and function in society, other resources for learning disabilities and doctor's visits may still be required. Under the proposed changes, families who have come to rely on resources, schools and disability pay could be left in the cold.