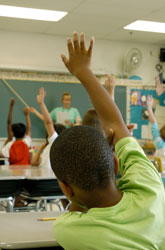 This week, the Obama administration introduced a new blueprint for education reform to Congress, calling for sweeping changes to the No Child Left Behind law. The blueprint is the first step in the development of legislation that could alter everything from how struggling schools are evaluated to what new standards are set in place, and already has supporters and opponents weighing the pros and cons.

The first thing on the agenda? An image makeover. “NCLB was sort of black and white,” says Jennifer Cohen, a policy analyst at the New America Foundation, a nonpartisan public policy institute. “There’s a lot of renaming that’s going on here,” she says, that’s designed to reflect softer language and more nuance. For example, what are referred to as “schools in need of improvement” will be renamed “challenged schools.” The name “No Child Left Behind” will be left behind in favor of a new title. The question now, says Cohen, is whether any of the nomenclature changes are going to translate into actual policy changes.

So, just what is on the blueprint, and what does it mean for students and schools? Here are the top three changes being proposed.

What does it mean to succeed in school?

Bush’s NCLB set a deadline for all students to reach proficiency … by 2014. That deadline now seems, as Secretary of Education Arne Duncan has called it, “Utopian,” and the changes would scrap the deadline in favor of a new measure of proficiency: whether students are “college- and career-ready” upon graduation from high school. Currently, there’s nothing in place to define what that actually means, but a push for national standards is currently underway that may align to “college- and career-ready” expectations.

Although NCLB has been criticized for narrowing the curriculum and encouraging teachers to “teach to the test” in order to meet aggressive goals, don’t expect the new reforms to back off from testing. The blueprint indicates that yearly student testing in math and reading will still be in place, although it proposes assessing a student’s individual growth over time, as opposed to how they hold up to the common yardstick, as a measure of student proficiency.

Evaluating and Turning Around Struggling Schools

Which schools are the worst, and how do we help them?

Under the stringent standards of Bush’s NCLB, nearly one in three American schools have been labeled as failing. The proposed changes would provide a multitiered system that would alleviate the pressure on middling schools, while diverting more resources to the lowest performing schools and giving the highest performing schools more flexibility.

“We have $4 billion for turning around our nation’s lowest performing schools,” said Secretary of Education Arne Duncan in his testimony before the House Education and Labor Committee. “This money targets the bottom 5% of schools, roughly 5,000 schools nationwide, including 2,000 high schools that, by themselves, produce about half of our nation’s dropouts.” According to Duncan, to qualify for the turnaround funds, school districts in the lowest performing 5% of schools have four options:

These turnaround strategies apply to the bottom 5%, but what about the rest? “The next to lowest 5% would be the schools looking at targeted intervention,” explains Cohen. “The top 5% that are doing well would be able to engage in more innovation practices and a more constructive rewards system.” And the 85% of schools that fall in between? Improvements to these schools may well fall to state and local control.

Adding More Competition into the Equation

Which schools and programs deserve the most money?

It’s no secret that the Obama administration believes in the power of competition to drive education reform. The Race to the Top program already has states in a mad dash for over $4 billion in education grant money, and the reform blueprint contains provisions for similar competitive grant programs.

Under Bush’s NCLB, education funding was formulaically distributed according to student statistics and other variables. The new grant programs would divert some of this money towards states and school districts that develop innovative reform programs to raise student achievement and teacher quality, among other things. “The best ideas will always come at the local level and we want to continue to support that,” said Duncan.

Next step for the ambitious reform proposal? Although we have a blueprint, there's no actual legislation on the table ... yet. For right now, it's up to Congress to hash out the details, and that will likely take months. According to Cohen, however, we might be surprised: "They are talking very optimistically about this happening reasonably quickly."

March 16, 2010
Next Article: Why Do Teachers Quit?
We enable strictly necessary cookies to give you the best possible experience on Education.com.Cookie policy