Log in with different email
For more assistance contact customer service
Physical Health
Obesity in Children: Are Chemicals to Blame?

Obesity in Children: Are Chemicals to Blame? 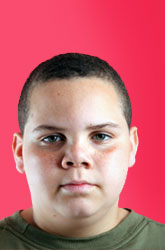 You've heard of the dangers of childhood obesity, but you probably never thought that your baby could be born overweight. A 2006 study by researchers at the Harvard School of Public Health however has found that overweight newborns are on the increase—and that these obese babies are turning into chubby children.

The study, which examined health records for over 100,000 babies over 20 years, revealed that the number of overweight infants under 6 months old increased more than 70 percent from 1980 to 2001. Researchers note that high infant weights are associated with obesity throughout childhood and adulthood.

Why the boost in baby BMIs? A breastfed baby doesn't eat doughnuts or watch too much TV—and you can't put tots on a treadmill. The puzzling rise in infant weight and body mass appears to begin at birth and can't be explained by diet and exercise. That's why researchers have started to look at the environment—and many of them have decided that obesogens could be to blame.

What's an obesogen? The term obesogen—coined by Dr. Bruce Blumberg—refers to chemicals in the environment that might contribute to higher birth weights and excessive weight gain in infants. Through his research, Dr. Blumberg found that prenatal exposure to a common chemical, tributyltin, caused mice to be born with more fat cells—almost as if they were "programmed" to be fat. Unsurprisingly, these lab mice then grew up obese. Blumberg says that chemical and environmental factors are "a possible model both in terms of prenatal exposure and early life exposure," but he cautions that hard evidence for humans is still scant.

Dr. Robert Lustig, a pediatric endocrinologist who studies the obesogen phenomenon, says that "There are a lot of studies correlating obesogen levels to adiposity [obesity] in children. The problem is that these studies show correlation, not causation. The best we can do is 'predictive studies', where obesogen levels in the pregnant mother predict adiposity [fatness] in the offspring in later life." In other words, there are strong hints that something is up with the environment and infant obesity, but the facts are still being uncovered.

While the hypothesis is still evolving, a number of scientific studies have found definite associations between specific chemicals and early weight gain. Some of the likely chemical culprits are:

So what can you do to protect yourself and your child both before birth and after? The first step is raising your awareness of the substances that surround you. You can also follow these sensible steps.

Above all, don't panic. Chemicals are everywhere in our modern world, and you can't raise your child in a bubble. Obesogens are only one piece of the puzzle of childhood obesity. Be sensible and continue eating healthy foods and limiting sugar intake for yourself and your child. In addition, be a smart mom and mom-to-be and minimize your chemical exposure for a happy and healthy baby.