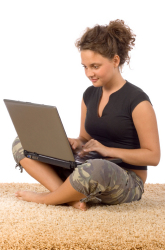 Your teenage daughter is supposed to be doing homework, but you catch her chatting online. She tells you that she's talking about the math test tomorrow. Before your eyes start rolling, listen up: teens are using social networking sites for more than just gossip, according to a new study by the National School Boards Association.

The students who participated in the online survey, ages 9 to 17, say they spend almost as much time social networking online as they do watching television. And it's what these kids are talking about on-line that's causing such a cheer: Education. That's right. Of the students who participated in the study, 60 percent reported that some of the most popular social networking topics were college planning, learning outside of school, careers, and schoolwork. They also report posting writing and art projects that may have nothing to do with schoolwork.

This is exciting stuff to the National School Board Association, which has promoted the concept of online education long before google and wikipedia were household names.

Ann Flynn, director of education technology for the National School Board Association, says incorporating social networking tools into educational curriculum is the way forward. “Learn it because I said so isn't effective right now. We need to use the Internet to involve students in project based assignments in the real world, taking place around the world,” she says.

Take a stodgy school classic: the book report. Flynn says a school in Cleveland, Ohio is posting student book reports on a blog for their peers, parents and other teachers to read and comment on. Think of a Sunday Book Review. “If someone is going to react other than the teacher, a child is much more likely to take an assignment seriously,” Flynn says. Other classes nationwide are gathering and displaying what they've learned on wikis, or collaborative web sites that can be edited by anyone with access to it. Students working on science projects can be steered towards blogs on global warming. During campaign season, political blogs give students the chance to feel the heat of debate first-hand.

Flynn says its not just about complementing the curriculum. She says collaboration, self-direction, and problem solving are all long-term academic and life skills that social networking helps students practice.

It's not just students benefiting. “It's terrific outreach for parents," Flynn says. "Sometimes asking, 'What homework do you have? What did you do today in school?' doesn't always elicit the best response. Now parents can go online and know what the class is doing."

Keeping pace with technology while leveling the playing field for students who don't have Internet access at home is a delicate balance, says Flynn. The study shows that 70 percent of school districts report having web site programs and 96 percent say at least some of their teachers assign homework requiring Internet use.

But many schools also block social networking sites, even though some of the sites they're blocking may be great resources. Flynn says she hopes the survey will spark conversation about the current school policies. “There are some really intelligent, topic specific blogs. We're not saying we should unblock all filters, but schools and parents should open up the conversation and figure out what to block and what to filter,” she says.

So, next time your child says her blog is educational, get curious; sit down and check out the blog with her. You might just learn something new yourself.

Next Article: Why You Should Start a Family Blog
We enable strictly necessary cookies to give you the best possible experience on Education.com.Cookie policy