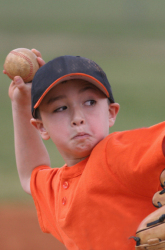 In the United States, more than 38 million youth and adolescents are involved in organized sports, according to Safe Kids USA. And while this participation provides kids many physical, psychological and social benefits, it also increases their chances of developing overuse injuries that traditionally have only been seen in high school and college athletes.

According to the Boston Children’s Hospital, 30 to 60 percent of student-athletes will experience an overuse injury, so it’s important to understand the causes and risk factors that lead to this condition, and also understand and implement preventative measures.

Most people consider injuries to be traumatic in nature, which means that they are the result of sudden impact. However, overuse injuries—also known as stress injuries—occur over a period of time. They are actually “micro traumas” to the body’s muscles, tendons, bones or ligaments, which result from using the same body part over and over again.

“The human body was designed to take a certain level of punishment and once an individual’s threshold is reached, the body should be allowed to recover,” says Dr. Aaron Mares, associate professor at the University of Pittsburgh School of Medicine and a team physician for his school’s football team. “Unfortunately, in some circumstances it is not allowed to recover and an injury is the end result.”

The prevalence of this type of injury is due in part to the rise of organized sports. In previous generations, most children engaged in unstructured physical activities, which were performed on an irregular basis. However, organized sports involve repetitive and sometimes intensive drills, which place more stress on young, developing bodies, and don't provide sufficient time for rest and recuperation.

Athletes who participate in sports that involve intense training using the same body parts on a recurring basis are at greatest risk of developing overuse injuries. These sports include:

Female athletes who participate in the following activities are also at higher risk:

Susceptibility to overuse injuries is higher in athletes who:

There are other factors that also increase susceptibility. According to Dr. Mares, who is also the lead physician for the Pittsburgh Marathon, “Children that have strength deficits, inflexibility and muscle imbalance seem particularly at risk."

He also notes that there are other physical conditions that can increase the chances of developing an overuse injury, such as “athletes with an abnormal gait, leg length discrepancy, knock knees, flat feet and are obese are also at risk.”

Some of the most common types of overuse injuries include the following self-explanatory conditions:

Other common overuse injuries include:

Symptoms may include aches, pain, swelling, bruising and decreased performance, Dr. Mares says. Diagnosis includes a careful history and a complete physical. X-rays or an MRI may also be necessary.

While treatment varies depending on the type and severity of the injury, Dr. Mares says it should include some level of rest and backing off a particular activity. He notes that other treatment options may include the following:

Fortunately, overuse injuries can be prevented by adhering to the following guidelines furnished by the American Academy of Orthopaedic Surgeons:

“Parents help their kids avoid overuse injuries by understanding what an overuse injury is and how it can be prevented,” says Dr. Mares. “They need to be an advocate for their child.” He also recommends STOP Sports Injuries and Safe Kids USA as two of the many campaigns that can serve as a valuable resource to parents, coaches and physicians.

Next Article: 8 Summer Games to Play with a Ball
We enable strictly necessary cookies to give you the best possible experience on Education.com.Cookie policy