A Parent's Guide to Formspring 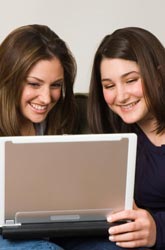 With so many different ways to communicate and interact online these days, bullying has moved beyond the classroom and into kids' homes through the cyber social world. Formspring is one of the more recent additions to the expansive landscape of social networking sites, blogs and the like.

On Formspring, which launched in November of last year, users ask each other questions and answer questions left for them. Questions don’t become public unless they’re answered. And while queries don’t have to be posed anonymously, many are.

Formspring is the 92nd-most visited site among all Internet traffic in the United States, according to the Web analytics firm Quantcast. An estimated 16 million Americans visit the site each month, compared to about 30 million worldwide. Among U.S. users, Quantcast says 27 percent are younger than 18. Formspring claims 800 million questions have been answered so far.

Site spokeswoman Sarahjane Sacchetti says Formspring was designed to give people a chance to ask and answer questions to people they care about, like friends or celebrities. But much attention been paid to the fact that Formspring has become popular among teenagers who use its cloak of anonymity to bully their peers.

Faye Rogaski, founder of Socialsklz :-), which teaches young people modern communication skills, says it’s popular among the middle-school set. “It’s an insecure age when kids are trying to figure out what people think of them,” Rogaski says.

Sacchetti says media reports have made it sound like more of a teenage haven for bullying than it actually is. “There are negative things, absolutely, but the majority of our users are having fun,” Sacchetti says. She points to Marvel Comics executive editor Tom Brevoort as a positive example, who’s taken about 5,000 questions from fans on his Formspring account.

Sometimes young Formspring users say nice things to each other, but more often than not, the site is used to make nasty comments that are met with snappy and biting comebacks in return.

Dr. Justin W. Patchin, co-director of the Cyberbullying Research Center, says teens respond to Formspring comments because they want to save face.

“The issue is, if you don’t respond, it’s almost like you’re giving something away,” Patchin says. There's the fear that not responding could be construed as a validation of whatever malicious rumors people might be spreading. It's that fear that motivates an equally nasty and biting retort.

Anthony Orsini, principal of Benjamin Franklin Middle School in Ridgewood, N.J., says Formspring creates paranoia and incites distracting conflicts among students. Teens often link their Formspring accounts to their pages on Facebook, another popular social-networking site where most people use their real names. Students then hear through Facebook when others mock them on Formspring.

“You don’t know who said it, but you know it’s someone at your school,” Orsini says. “A conflict between two kids becomes embroiled in this group thing.” And worse, it becomes public and because it's online, potentially viral.

Many teens and tweens have told Rogaski they avoid the site because of mean comments. But Patchin says research doesn’t show Formspring as a worse place for online bullying over other social-networking sites.

Should Kids Use Formspring?

Rogaski and Patchin say parents shouldn’t forbid their kids from using the site. That will only make them more curious – and if they really want to use Formspring, they’ll find a way.

But Orsini disagrees. He’s gained media attention for telling parents to keep their kids off social-networking sites like Facebook until high school. And given the hateful and sexual content he’s seen so much of on Formspring, he sees no reason for anyone – of any age – to use it. Saying kids will use certain websites no matter what "doesn’t give parents credit for their role," he says. “When your kid’s 13, you tell them not to smoke or drink,” he says. “I would never tell a parent that they’re a good parent if they let their kids use Formspring.”

Orsini advises putting computers in a public part in your home, not your child’s bedroom. Have a central place where all electronics must stay at night, he says, and install parental control software on your computers.

If you let your children to use Formspring, remember that the site’s own terms of service say users have to be at least 13. Here are 6 more rules to pass on, courtesy of Formspring itself:

For ages, teens and tweens have worried about what others think of them. And some kids are inevitably mean to each other. Keeping up with how kids interact online will help you guide your children.

July 30, 2010
Next Article: Cyberdating Abuse: What Parents Need to Know
We enable strictly necessary cookies to give you the best possible experience on Education.com.Cookie policy