Tap into Your Child's Talents to Master Math 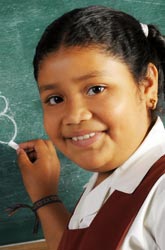 For many people, math class is stressful. But often the problem isn’t the math itself: it’s the way it’s being taught. Anyone can be good at math if they’re lucky enough to find a teacher whose methods align with their personal strengths.

In 1983, Howard Gardner published his theory of “Multiple Intelligences.” He disputed the belief that “intelligence is a single faculty and that one is either ‘smart’ or ‘stupid’ across the board.” Instead, he observed that people rely on a variety of skills that help us resolve problems and difficulties. He grouped these skills into seven different sets and called them “intelligences.” Furthermore, he observed that each person uses a different combination of these skills: “We each have a unique blend of intelligences.”

But schools aren’t set up to accommodate personal differences. They are designed to be uniform. Schools are supposed to be fair, to make sure that everybody has equal access and no one has special advantages. But as Gardner argues, “We obviously look different from one another, and have different personalities and temperaments. Most important, we also have different kinds of minds.” So while the conventional method of lecture and note-taking works for some students, it bypasses the needs of many others. Students conclude that they’re not good at math, when all they really need is a different approach to learning it.

In his book Math for Humans, Mark Wahl offers tips on how to make math accessible to all kids by including all of Gardner’s Intelligences. Here are some strategies on how to tie math to the seven skill sets. Parents can use these ideas at home to help students study. Additionally, they could be suggested as strategies for teachers or tutors.

This child enjoys making music or rhythm. For her, music evokes emotion and a kind of mental satisfaction independent of rational thinking.

This student relates to the world via words, and enjoys talking, reading, or writing.

This child loves to move, and enjoys using his body to accomplish tasks. He may get restless just sitting and listening, and prefers to explore the world and manipulate objects.

This child is very visual. She is observant, good with directions and the orientation of objects in space.

This child excels at recognizing patterns. He has an intuitive grasp of how events relate to each other, and likes to determine cause and effect.

This child is very good at perceiving the thoughts and feelings of those around him. He enjoys being with others.

This student understands herself very well. She is good at reflection and examining her thought processes. She has a good handle on her own values, preferences, and strengths.

The best math curriculum appeals to all seven intelligences, and good teachers look for ways to include all learners. But with rising pressure to cover an ever-increasing number of topics for standardized tests, teachers are forced to save time by relying more heavily on traditional lecture. Parents can make a difference at home by using techniques that appeal to their child’s particular strengths. Multiplication games provide an opportunity for kids to learn in an interactive way. More materials can be found on our math resources page.

Next Article: Multiple Intelligences: Understanding Your Child's Learning Style
We enable strictly necessary cookies to give you the best possible experience on Education.com.Cookie policy