International Assessment: What's the PISA All About? 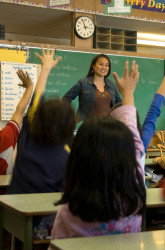 Collect This Article
3.7 based on 23 ratings
by Education.com

American students are still falling behind in math compared to the rest of the world according to results from the 2009 Programme for International Student Assessment, commonly known as PISA.

The results showed that American students are behind when compared to those in other industrialized nations across the globe. The United States ranked 31st in math, which shows no improvement from the 2006 PISA. Science literacy did improve since three years ago when the U.S. scored below the average. In reading literacy we ranked 17th.

The two-hour pen and paper test was administered to about 470,000 15-year-olds in 65 countries over the course of 2009. They also completed personal assessment questionnaires that gathered info about their attitudes and approach toward learning and their learning environment. The test pooled information from principals of participating schools that included socio-economic background and resource availability.

The PISA, administered by the Organization for Economic Cooperation and Development (OECD), is given every three years, always assessing literacy in at least three components: reading, science and math. The survey is considered the most comprehensive program to assess and compare student performance around the world.

The United States along with 33 other member nations make up the OECD, half of whom out-rank the US on the PISA overall. In the single subjects of math and science even more members ranked higher.

Many in the education field believe these results give us a look into the future of the global marketplace, with the United States failing to compete with its better-educated counterparts.

After the results of the 2006 PISA where the US showings in math and science were below average, Adam Thibault, then Senior Policy Analyst for the Strong American Schools in '08 campaign, said parents should see these results as a wake-up call that there are systemic problems with the American education system.

“We need to put pressure on our own leaders,” he said, “to create standards that are a bench mark against other nations.”

The signing of the American Recovery & Reinvestment Act in 2009 allotted $100 billion in new funding for the Department of Education (DOE). In November of this year the Recovery Accountability and Transparency Board reported that, at 48 percent, the highest percentage of “turn around” funds for schools is going to high schools.

This coincides with the Civic Marshall Plan being launched by the America’s Promise Alliance, a partnership of diverse corporations, nonprofits and groups, to increase high school graduation rates in schools deemed “drop-out factories,” such as those where graduation rates are only as good as 50/50.

These may be the broader signs of a turn-around in education, or at the very least, that more attention is being paid to the American educational system. But there’s always more that can be done.

What Can We Do?

Justin Stone, an AFT Associate in Educational Issues, has pointed out that in many cultures, teaching is a revered position, and that improving the academic achievement of American students starts with a higher degree of respect for our teachers.

There are steps we can take right away to support local communities, our students and schools:

For more information about the PISA, visit the website.