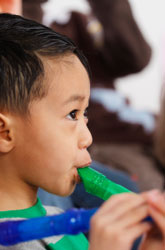 Everyone knows that listening to music can help young minds grow, but new research is being done to show that the act of playing a musical instrument is even more beneficial for brain and nervous system development.

What’s so different about a musician’s brain? A lot, says Professor Donald Hodges, Director of the Music Research Institute at the University of North Carolina.

Hodges recently did a study with a group of highly trained music conductors and tested them against a control group of non-musicians. He found that the musicians showed much more activity in the audio and visual centers of the brain. A normal brain will only focus on audio or visual information separately; but the musicians’ brains will stay active on both.

“This is an indication that musical training and experience have rewired neural networks,” says Hodges.

What can this mean for kids? Here are the four key reasons why being involved in music studies at a young age can help your child academically.

1. Music studies can help your child’s ability to concentrate in school.

Because music training can “fine-tune” the brain’s audio/visual system, it can improve our ability to pay attention.

In her article “Musical Training Gives Edge in Auditory Processing,” she claims musicians have good speech-in-noise perception, meaning they can get the most information possible out of a heavy stream of sound. This means being able to pay attention to a teacher in the midst of a noisy classroom.

This skill comes from the musician’s experience playing in a group—they constantly listen for particular sounds in a large group of different tones, they listen for cues, pick out individual lines, and hear their own instrument over the others.

2. Music studies can improve your child’s reading and writing abilities.

In her article, Kraus says that musicians can process speech better than non-musicians because their audio system is so well trained. They are taught to hear pitches and tones as if it were another language.

“Music and language share many features,” she says, “the most direct being that both exploit changes in pitch patterns to convey information.”

This means that musicians don’t just have a good ear for music. Their training allows them better listening skills and better verbal skills. Also, because a musician’s brain can process more information in the presence of distractions, reading and writing becomes an easier task for them. In fact, Kraus argues that music training may provide a good “remedy” or a tool for children with language-based learning and reading disabilities.

Because musicians usually start at a young age, changes in their brain will continue to help them as they get older. Kraus explains that with young musicians, “attention to sound is regularly practiced during pivotal periods of brain development.”

This means a young musician’s improved memory skills and faster reaction to sights and sounds will follow him to high school, college and beyond. Not to mention, music is a disciplining activity. It requires daily practice, dedication, and commitment, all skills which become helpful as he gets older and there are more distractions from school work.

“There are improvements in additional sociological behaviors,” says Professor Hodges of music’s effect on kids. “Focus of attention, positive attitude, leadership and responsibility may accrue from being involved in music studies.”

4. Playing music will improve your child’s quality of life.

According to recent studies, it was found that students who participate in school band or orchestra have the lowest levels of current and lifelong use of alcohol, tobacco and illicit drugs among any group in our society.

“It is apparent that music can play a significant role in improving one’s quality of life,” says Hodges. “Whether there are transfer benefits from studying music or not, there is ample reason to believe that studying music for the sake of the aesthetic experiences it provides is benefit enough.”