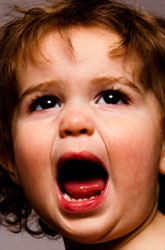 Power struggles with toddlers take many parents by surprise. In the blink of an eye, your sweet, happy baby has been replaced with an impossible handful. Suddenly the easy-going tot you used to have now replies to every suggestion with an automatic "no!" and seems to enjoy testing the limits of your patience with his stubborn refusal to cooperate.

Way back when, before you had your first child, you probably observed other parents struggling with a willful toddler. You might even have had the occasional judgmental thought about the mom who was attempting to drag a screaming two-year-old away from the toy department, his entire body stiffened to resist her, or the dad frantically pleading with his small child to put on his shoes. "Just make him do it!" you probably thought. "Who's the parent here?"

But suddenly the scene is all too familiar, and power struggles are a regular part of your day. You're so used to your toddler being contrary you've started to wonder if his vocabulary even includes the word "yes" any more. It seems that everyone has an opinion on how you should be handling the situation—but the last thing you feel like doing after an epic battle with junior is keeping your cool while Auntie Betty dishes out her well-intentioned, but oh-so-critical "advice."

It's not just you. Power struggles with toddlers are almost a rite of passage, and there are several typical causes:

Even if you can't figure out a specific cause for the power struggles, there are things you can do to prevent everyday issues from becoming epic shouting matches.

Even in the most difficult situations, it's important to keep your power as the parent. Katz points out that it's incredibly difficult for a child to lose parental structure and become the boss at the age of 2 or 3.

It's unrealistic to expect that you'll avoid all power struggles—after all, this age is called the terrible two's for a reason. But by choosing your battles wisely and refusing to get drawn into the drama, you'll keep the upper hand. Reassure yourself this won't last forever. Dr. Mark Roberts, Director of Clinical Training at Idaho State University says that tantrums and disobeying parental instruction are "routine problems" for American two- and three-year olds, but "should resolve well by age 4" in response to these 'authoritative' parenting techniques, including setting limits while still providing support for his growing independence.