Chicken Pox Party: Should You Do It? 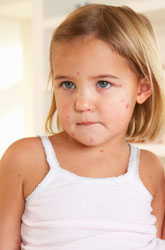 Not so long ago, chickenpox was a rite of passage. Some of your parents may even have sponsored play dates with infected kids in the hopes of passing the virus onto you—better to tough out chickenpox while you’re young, folk wisdom said, than face potentially deadly complications getting it later in life. Now the so-called “pox party” is being revived through social media, and some parents are going so far as to send pox-tainted lollipops cross-country. What’s the risk to your child?

From Pox Parties to Pox Pops

The advent of the varicella vaccine in 1995 brought chickenpox rates significantly down in the U.S., but not every parent opted to vaccinate; after all, the disease is generally considered more an annoyance than a scourge. Now, as the anti-vaccine movement in America has burgeoned, so too has the pox trade amongst non-immunizing families—thanks in part to modern technology.

The varicella-zoster virus is extremely contagious and spreads through infected air and surfaces, and social media makes it easier than ever for families to find not only poxy playmates, but pox-tainted items. Facebook groups like “Find a Pox Party in Your Area,” for instance, matched up infected kids with others seeking to contract the virus, and posts on Craigslist offering infected lollipops, toys, and clothing items went viral nearly as fast as the disease itself before law enforcement officials began clamping down.

So What’s the Pox Pop Danger?

First and foremost is the hazard of exposing a child to contaminated bodily fluid from a total stranger. It’s improbable that varicella-zoster would survive transit, so the likelihood of kids picking up the pox from an infected lollipop or blanket is slim. What they could pick up, however, is the multitude of bacteria and other diseases that can survive shipping, like group A strep or influenza.

Without knowing the complete medical history of the person whose germs are all over that tainted lollipop or blanket, parents can’t be sure that they’re not passing on an even bigger problem down the road—a highly infectious staph infection, for instance, that runs a much higher risk of landing a child in the hospital than the chickenpox infection itself.

Doctors also point out that children who become ill with the virus run the risk of chickenpox complications. Prior to the introduction of the vaccine, around 100 people a year died as a result of chickenpox, whereas the probability of a severe reaction or death as a result of the vaccine is, as the Center For Disease Control chickenpox fact sheet states, “extremely small.” Exposure to the active virus (as opposed to the vaccine’s weakened strain) also makes kids more likely to contract shingles, a painful late complication.

Additionally, intentional infection can raise some sticky ethical issues, say some doctors—what if an unvaccinated child purposefully contracts the disease and then accidentally passes it to someone with compromised immunity who is unable to receive the vaccine?

All medical risks aside, pox pops are also legally risky—knowingly sending infectious material through the postal service is prohibited by federal statute.

But parents of unvaccinated children point out that vaccines themselves are not without risk. They argue that exposure to chickenpox promotes resistance to it, and in a more natural way than vaccines. Exposure to the actual infection, they contend, will build up stronger immunity to it while avoiding the potential hazards of vaccinations.

If nothing else, the pox party issue has definitely reinvigorated the vaccine debate in America. Non-immunizing parents worry that the best interests of drug companies, not the best interests of children, are prompting ever-increasing childhood vaccinations. Recent documentaries on the vaccine debate like The Greater Good present the issue as tainted by media bias that “peddles fear and reduces the issue to over-protective mothers battling against well-meaning, white-coated doctors. This sensationalized debate distracts everyone from the legitimate scientific issues of vaccine safety.” On the other hand, organizations like the American Academy of Pediatrics tout childhood immunizations as “our society’s greatest health care achievement,” pointing to the eradication of such menaces as polio.

The Center for Disease Control currently recommends that “all healthy children” between 1–12 years old should receive two doses of the MMRV, or measles, mumps, rubella and varicella, vaccine, as should adults without evidence of immunity (especially those at highest risk). Whether or not you choose to vaccinate your child, you may want to think twice about mail-order chickenpox.