Log in with different email
For more assistance contact customer service
School and Academics
Preschool
Is Your Pre-K Teacher Giving What They Get?

Is Your Pre-K Teacher Giving What They Get? 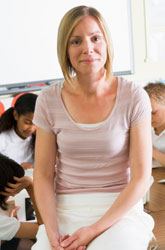 When it comes to childcare and preschool programs, teacher turnover is a big problem. Here's why: Research shows that stability and routine are crucial for children, not only at home, but also in daycare and school settings. So when toddlers and young children are confronted with a new teacher every few months, it’s no surprise that the learning suffers.

One of the biggest reasons preschool teachers cite leaving the field is salary. According to the Bureau of Labor Statistics, the median annual wages of preschool teachers were $23,870 in May 2008, with the bottom 10 percent earning less than $16,030.

Because education is funded for the most part at the state level, location has a lot to do with how much teachers are paid. But according to Adele Robinson, Director of Public Policy for the National Association for the Education of Young Children, the problem of low preschool teacher wages really has to do with how we as a country finance early childhood education at large.

“We’re still primarily putting the responsibility on the backs of parents who haven’t had 18 years to save,” Robinson says. She explains that parents pay about 60% of the fees associated with early childhood education and the other 40% is covered by public money. “There’s only so much more we can raise the tuition before parents say, ‘I can’t afford that.’ You want to hire the best teachers, and you want to not just hire them, you want to keep them—but teachers leave and it’s really because of pay.”

Steven Barnett, Co-Director of the National Institute for Early Education Research (NIEER), explains that because families shoulder most of the responsibility for paying for preschool, and because most working families need long hours of care for their children, they simply can’t afford to pay very much per hour. “There’s a relatively small group of well-educated two-parent families that can pay a lot for these programs… $10,000 or $12,000 per year,” he says, “but most families aren’t paying anything like that, and that constrains the teachers’ pay.”

Though current research points to the relevance of prekindergarten in a child’s growth and development—that a strong prekindergarten experience sets the stage for a child to succeed in school—Robinson says we’re still struggling to match the rhetoric about the value to the public good and investment. “It’s really a question of what the tax payer values,” she says. “We could start creating a very strong, stable profession, but it starts with financing.”

Barnett agrees. “The only way we get adequate teacher salaries is when programs are publicly funded,” he says. “It doesn’t help that the government implements some programs on the cheap that aren’t comparable to the ones that produce great effects,” he says.

For example, Barnett explains, Head Start teachers make only about half what public school teachers make. “There are small positive effects, but I think the effects would be a lot bigger if we paid teachers what we do in the public schools,” he says.

And it’s not just Head Start. Richard Clifford, Senior Scientist at the Frank Porter Graham Child Development Institute at UNC-Chapel Hill, recently completed a study surveying preschool programs in eleven states and found that across the board preschool teachers who work in the public schools make almost twice as much as those working in the private sector. “I think as Pre-K is accepted as a permanent part of what education agencies provide, then we’ll see equity—it’s going to happen gradually,” Clifford says.

Robinson points to Florida as an example of underfunded preschool programs. There they have universally available Pre-K, but according to Robinson, the legislature wasn’t invested in the concept. “They give so little money to a provider per child that you couldn’t possibly achieve high quality,” she says, “and then they’re assessing them in kindergarten and saying, ‘Oh my, why aren’t they ready?’”

But Robinson reminds us that even kindergarten is a relatively new phenomenon—and it’s still not a requirement in some states. “We’re only starting to now put together the research and cost benefit,” Robinson says.

Whose education should our tax dollars serve? Six-year-olds, certainly. We’ve agreed on that. But what about five-year-olds? Four-year-olds? Clifford explains that historically we made decisions about public school and who it served based on the working patterns of families. Back in the Industrial Revolution, when public school got started, the school year began after the crops were in. And initially, public school served mainly white boys. Gradually, this expanded to serving white girls, and finally all school-age children, “including children with special needs and children of color,” Clifford says. “We finished doing that in the middle part of the 1900s, and since then the expansion has moved to serving younger children. So now about one-quarter of all four-year-olds are served in public school, and that has been a pretty big shift in the past couple of decades.”

But many argue that one-quarter isn’t enough. Robinson, Clifford, and Barnett say that if there’s any doubt that preschool is not only beneficial but also a necessary starting point for young children, folks should take a look at research reports that have looked specifically at the well-funded and successful prekindergarten programs—programs such as those in Oklahoma and New Jersey, where legislation has mandated that preschool teachers are properly educated and paid. Bill Gormley and other researchers at Georgetown’s Center for Research on Children in the United States (CROCUS) have evaluated the effectiveness of Oklahoma’s Pre-K Program, and Ellen Frede, Steven Barnett, and others at NIEER have evaluated the effectiveness of the Abbott Pre-K Program in New Jersey.
Want to get involved in your neck of the woods? Visit Stand for Children and MomsRising to find out how you can make a difference in your state. And visit NAEYC’s policy page to follow federal updates on early childhood education and to sign up to receive alerts through Children’s Champions.
Next Article: Study Shows the Right Preschool Leads to Later Success
We enable strictly necessary cookies to give you the best possible experience on Education.com.Cookie policy