Log in with different email
For more assistance contact customer service
Kindergarten
According to the School Psychologist: Kindergarten

According to the School Psychologist: Kindergarten 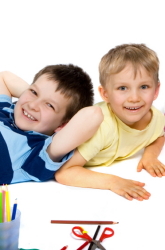 Try explaining to your 5 year old that the ice cube in her glass of juice was once a tiny puddle of water, or conversely, that the glass of juice itself could be frozen into a yummy popsicle, and you might not have much luck.  Children in the kindergarten set process the world around them by how things appear visually.  According to Dr. Laurie Zelinger, Ph.D., a certified school psychologist with over thirty years experience, children of this age are “egocentric, and are governed by how something visually appears.  They do not understand that a ball of clay has the same amount in it when the same ball is rolled into a long snake.”

Since children of this age lack the understanding that something can change form and still retain its original properties (or eventually return to them – as an ice cube melting back into water), they see rules as absolute and concrete.  To a kindergartener a rule cannot be broken for no other reason than the simple fact that she was taught the rule, and rules are to be followed.  Unlike an older child who may see rules as flexible and attempt to interpret or negotiate them, kindergarten aged children perceive rules as unyielding law.  This is why even a small violation of a playground or classroom rule by a peer can be met with such an extreme level of frustration and protest.

According to Zelinger, “The gap between reality and fantasy is not yet firmly established.  This results in fears rooted in both real and imagined concepts.”  The black-and-white viewpoint that children in this age group employ to see the world results in a desire to engage in familiar activities, and often new or unknown situations are perceived as distasteful or scary.  Dr. Zelinger states, “Children in this age range want familiar routines and do not like new situations.  They are often frustrated by the rift between their desires and actual abilities, which may lead to outbursts because of the limited resources available to them.”

So what is the best way to help your child through this all-important phase of development?  According to Licensed Marriage and Family Therapist and Parenting Coach Lori Landau, “Structure, support, and security are going to be your top three concerns for your child throughout the growing years.”  If your child has a support system at home rooted in these three concepts, she will have a better chance of thriving, both in the kindergarten years and well beyond.