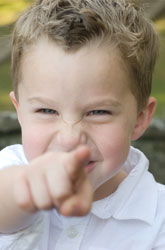 My 4-year-old son went through a tough time with aggression when he was about 2.  He's been much better for the past year or so-- using words instead of his body to get what he wants.  But recently, he's started to intentionally say things to upset people, like "You're dead!" or "You're a bad guy!” I was making a big deal about it, but that seems to have made it worse.  I don't want to give it too much attention, but at the same time I want him to know I don't like it.  Any suggestions? From Stephanie, New York, NY

You are absolutely right to stop making a big deal about this behavior. You have just learned one of the basic rules of human behavior – anything that gets reinforced through attention gets repeated! First of all, your son’s behavior is quite normal. Young children are like scientists, exploring their world. At some point, every kid makes a gun out of his fingers, declares, “I wish you were dead,” or says, “You’re bad,” just to test out the reactions of others. The key to getting beyond this phase lies in how you respond to these behaviors. Some points to keep in mind are:

Remember that as adults, we give power to words through our reactions. If there is no reaction, there is no power in the words, and the entire situation becomes neutralized.

Next Article: Is Your Teen Typical, or Troubled?
We enable strictly necessary cookies to give you the best possible experience on Education.com.Cookie policy