Log in with different email
For more assistance contact customer service
Preschool
All About Preschool: Phonics and Phonemic Awareness

All About Preschool: Phonics and Phonemic Awareness 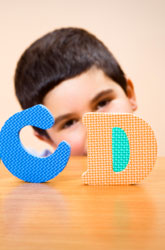 Before your child begins to read, he is learning about the way letters and sounds work together to form words. Phonemic awareness and phonics are the first steps a child makes in the journey of beginning to read, but for many, the terms can be confusing and intimidating. So just what are phonemic awareness and phonics, and how can you help your child master these important early learning skills?

Whether he is aware of it or not, by listening to and playing around with the sounds in language, your child is building an important foundation for learning to read. These playful processes are a part of phonemic awareness, which research has found to be the best predictor of reading success in young children.

“If your child has phonemic awareness, he or she understands that words are made up of sounds (phonemes) and that those sounds can be grouped together, moved, and changed,” says Carolea Williams, publisher for Teach Bright. “Since phonemic awareness activities deal with sounds only, they require no reading or writing, making them perfect for preschool-age children.”

Throughout the day there are many opportunities to point out words that begin with the same sound. Just making your child aware of sounds in words is one of the first steps in reading. Try a few of these simple phonemic awareness activities and give your child a jump start at becoming a super reader:

Unlike phonemic awareness, phonics activities add printed letters into the mix. “Phonics activities connect sounds with letters. If you play a sound matching game and then tell your child what letter represents each matching sound, you have added a phonics lesson to the activity,” says Williams. “For example, if your child recognizes that the words 'monkey' and 'mop' both begin with the /m/ sound, you can print the letter m and tell your child that that letter makes the /m/ sound.”

After your child gets the hang of listening for and identifying the sounds in words, you can add the written letter to make it into a phonics activity. Try a few of these fun first phonics activities to boost your child’s reading readiness:

Research indicates that your child’s success as a reader is largely dependent upon his ability to identify and manipulate sounds before he begins to read. A little bit of time and energy invested in phonemic awareness and phonics activities will yield great returns as your child begins to read. So go ahead and play around with sounds and letters - you and your child will be glad you did!