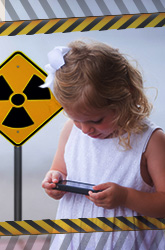 Kids and cell phones. They seem to be inseparable these days. But is that a good thing? In recent years, you may have heard rumors about them causing brain cancer and other diseases. Is this claim based on any research? Is handing your child a cell phone equivalent to handing her a cigarette? Or is this some bogus claim made up to try to scare us away from beneficial technology?

Dr. Devra Davis, author of Disconnect: The Truth About Cell Phone Radiation, What the Industry Has Done to Hide It, and How to Protect Your Family, is one of the major scientific figures who is trying to spread the word about the dangers of cell phone use. Is she a scam artist? Actually, Davis is the winner of a 2007 Nobel Peace Prize, former presidential appointee under Clinton, former professor of epidemiology at several respected universities, and a National Book Award Finalist. And she believes that cell phones can kill.

“Cell phones are essentially two-way microwave radios,” Davis explains. “They have never been tested for safety. They have been assumed to have no biological effect, but now we are finding that that’s just not true. They may be much weaker in power than regular microwaves, but because they utilize a pulsed signal, they can weaken the brain-blood barrier, produce free radicals, and cause other harmful health issues.”

When you first look at the information we have on cell phone use, you may think that the research is inconclusive. After all, some studies find that cell phone radiation is at a safe level, whereas others find that it can cause health problems. Davis, however, stresses the difference between these two types of studies.

Many of the studies that have “proven” the safety of cell phone have focused solely on brain cancer. “Brain cancer is the wrong thing to focus on at this point, because it can take forty years to develop,” Davis explains. “We know that because when the bombs dropped at the end of World War II, there was no increase in brain cancer until forty years later. But whether or not brain cancer is a concern, cell phone radiation has been proven to cause a host of other biological effects.”

The Effects of Cell Phone Radiation

Many parents, who use cell phones themselves, wonder whether the risks are even greater for their children. The answer is—yes.

In June of 2012, the FCC announced that it plans to reexamine and revise current cell phone standards. Good thing, since the last time the standards were revised was in 1996, and the standards were geared towards a military man or business man dubbed “SAM”—or “standard anthropomorphic male”—who was six-foot-three, weighed 220 pounds, had an 11-pound head, and made phone calls that lasted up to six minutes. The American Academy of Pediatrics urged this reexamination, telling the FCC, “Children ... are disproportionately impacted by all environmental exposures, including cell phone radiation ... when [cell phones are] used by children, the average RF energy deposition is two times higher in the brain and 10 times higher in the bone marrow of the skull, compared with mobile phone use by adults.”

Just take a look at the fine print warnings on your Blackberry, Android, or iPhone. Most versions of these devices warn that the user should keep the phone away from teenagers or pregnant women. Are we putting our children at risk?

What Parents Can Do

As a parent who cares about your child's wellbeing, what can you do? Despite the fact that the new safety standards have not yet been written, you can still take the following steps to keep your kids safer from the damage that radio-frequency radiation can cause:

If you're concerned that your children have already been exposed to harmful amounts of radiation, don't fret—recent evidence shows there are ways to detox after exposure. Make sure that your children get plenty of nutritious food, including vitamins such as A, E, and C. Some experiential studies suggest that animals that were exposed to these nutrients were able to resist the damage of radio-frequency radiation more easily.

Next Article: Cell Phones
We enable strictly necessary cookies to give you the best possible experience on Education.com.Cookie policy