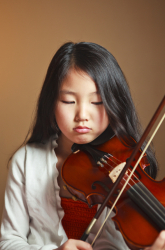 Your kid spends soccer practice staring into space, or her desire to dance seems to be done. But is she really ready to quit—and should you let her?

If your child is involved in extracurricular activities, you can be sure there will come a time when she will want to quit. But how can you tell if the time is right, or if she just needs a little extra motivation? There are several steps you can take to figure it out.

Watch and Wait. Don’t just rush into action. As a parent, your first step is to find out why your child suddenly wants to kick her extracurricular to the curb, says Xan Nelson, a licensed figure skating coach who authors a blog about her coaching figure skating (http://xan-boni.blogspot.com/). Instead of rushing to take action, pay close attention to her behavior when she’s at practice. Are there problems with the coach or other players, or pressure from a peer group? Put quitting on the backburner at first, and suggest swapping teams, teachers or training regimens, and see how your child responds.

Listen and Learn. The best way to find out the issue is to speak with your child—but any parent knows this is sometimes easier said than done. Broach the issue gently. If your youngster thinks you’ll judge her or get angry, she’s less likely to open up. A trip in the car can be the ideal time to talk about her feelings. You aren’t face-to-face, which can relieve the pressure in itself. Ask if something has happened to make her dislike the activity, or if there’s something she’s worried about. Perhaps there’s a bullying situation that you’re unaware of, or your child fears failure at an important meet.

Outline the Options. If she quits extracurriculars, she can spend all day texting her friends and watching TV, right? Wrong. Nelson says you should make sure your youngster understands she won’t replace practice with free afternoons to lounge around. Instead, she suggests, “Have something else productive in mind to replace the activity with. You'll be amazed at the kids who choose the skating over ‘Great! You can help me rehab the basement!’”

Pinpoint the Pattern. Does your child start more seasons than she sees through? If your little one is a frequent quitter, ending extracurriculars early, and never giving new activities a chance, it might be time to agree on a trial period. Enforce a mandatory amount of time—three months, for example—to get past the unfamiliarity and initial difficulty of learning a new skill. If she still hates it, you can call it a day.

Add Some Alternatives. Variety is the spice of life, so add a new class or different activity to your schedule.  Whatever it is, do something. Research from the U.S. Department of Education, National Center for Education Statistics shows that kids who participate in extracurricular activities have better grades, better school attendance and are more likely to consider college than those who don’t engage in extracurricular programs.

Defer the Decision. Sometimes, doing nothing is the best course of action. If you’ve paid non-refundable fees or your sports star is committed to a team, consider forcing her to see the season through, unless the reason for quitting is so severe (bullying for example) that continuing isn’t wise. Giving it some time before you make the final decision may also change your kid’s attitude. If she feels the same after a few months, you’ll know quitting is the right choice.

Assess Ability. What if your child is unusually talented? Should you allow her to waste talent that could potentially earn a scholarship or allow her to compete at an elite level? First, you have to decide if your little athlete really is that talented. This isn’t something you can decide alone, and Nelson says even coaches can't be trusted here, because they may have a financial stake in your kid. Only a disinterested third party, or measure of accomplishment—winning high-level competitions, for example—can tell you if your child’s abilities are unusual. Nelson says that most highly talented kids stay motivated, but parents should be sure that their children are motivated to follow their own dreams—not yours. If your youngster is only doing an activity to please you, she won’t stay interested for very long. She has to want it herself to be truly motivated.

Ultimately, parents are driven by what will be best for their child in the long term. If your child doesn’t want it, you’ll be doing more harm than good by insisting on the issue. A little push or some motivational incentives can be good, but if she’s determined to stop, you won’t achieve anything but resentment by forcing her to continue. And as the old saying goes, absence makes the heart grow fonder, so who knows? After a break, your kid might realize how much fun that activity was after all.