Log in with different email
For more assistance contact customer service
School and Academics
Politics and Education
Is Race to the Top Making the Grade with Teachers?

Is Race to the Top Making the Grade with Teachers? 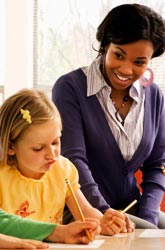 True to its name, Race to the Top has already instigated some of the fastest educational reform this country has seen. President Barack Obama’s landmark education initiative entered its second phase in June, leaving in its wake a flurry of legislative restructuring as states fought for more competitive applications. Round two will divvy its billions to states that offer conceivable reform proposals in such areas as teacher accountability, standards and assessments and longitudinal data systems.

Groundbreaking? Absolutely—48 states have already agreed to adopt common core standard, and this before a single dollar was awarded. Still, some educators worry that the contest is turning meaningful change into a $4 billion carrot on a stick.

Ironically, many of the points that the Obama administration presents as catalysts for positive change are ones that education professionals see as problematic. One such provision of Race to the Top is easing limits on charter schools.

In his 2009 remarks to the U.S. Hispanic Chamber of Commerce, Obama openly acknowledged America’s effective charters as an integral part of the nation’s educational strategy in “promoting innovation and excellence.” Parent demand for charters is on the rise and the passage of several cap-lift bills across the nation might prove advantageous if, as Washington is banking on, charter competition fosters innovation and reform.

But education scholar and former U.S. Assistant Secretary of Education Diane Ravitch sees the charter push under Race to the Top as a possible liability. Private charter schools vary in quality and on the average don’t outperform public schools, Ravitch argues—instead, they drain resources. “No high performing nation is undercutting its public school system,” she adds.

Another issue is data. The theory behind Race to the Top’s longitudinal data collection thrust is that it will help educators become more effective by tracking pupils’ progress over a period of time, thus giving teachers a better understanding of where certain cognitive gaps need bridging. “Intervention becomes easier,” says Tracey Bailey, Director of Education Policy at the Association of American Educators. This kind of long-term student measurement “could work out better,” he says, in that it addresses the issue of underperformance while taking into account some of the challenges that teachers face.

If a teacher inherits a socioeconomically-challenged 6th grade class with a 3rd grade reading average, Bailey postulates, and accomplishes two years of progress in one year, that teacher might still face condemnation for not making adequate yearly progress—under the “old” data system, her students are still at the 5th grade level. However, longitudinal data tracking could indicate her teaching methods as successful and note her impressive two-year gain. “This changes the debate and focus for a classroom teacher,” Bailey says.

But not necessarily in a good way, say some educators—it depends on how that data is used. Race to the Top’s program description talks about “rewarding and retaining effective teachers”— a concern for those who argue that high-stakes test-based evaluation will only further erode education. Though the government doesn’t advocate tying evaluation solely to tests, the obvious linking of data and compensation presents Race to the Top’s biggest hurdle for schools. Effective teachers are defined in terms of student growth, or “the change in student achievement between two or more points in time,” as the Race to the Top Guidance and FAQ literature states.

With jobs at stake in a down economy, Ravitch sees this tactic as particularly dangerous. “Pushing this approach will lead to cheating, gaming the system, narrowing the curriculum only to what is tested,” Ravitch states. “To the extent that scores are used to evaluate teachers, we can expect to see a diminished quality of education as test prep and testing take over the school day.”

Finally, data and compensation under Race to the Top have raised uncomfortable questions of nationalization vs. local autonomy. School districts nationwide have been hit hard by the budget crisis, and many felt forced to compete for the program’s resources despite qualms about government intrusion. Round one of Race to the Top saw lawmakers scramble to align state policy with the performance evaluation demanded by the federal scoring criteria—in some cases dismissing almost overnight sensitive union issues like seniority-based compensation and tenure. This leapfrogging, Bailey says, accounts for much of the skepticism from teachers unions: “Many of these proposed changes are being initiated, designed, or mandated from outside of the collective bargaining process.” Teachers—and certainly, unions—feel shut out of the process.

The educational community has taken some heat for negativism in the first two rounds of Race to the Top. For most teachers, however, this is anything but true. The 325,000-strong California Teachers Association’s policy statement on Race to the Top stresses the potential good of the initiative: “If done right, we believe [Race to the Top] grants could accelerate education reform at the state and local levels and go a long way toward ensuring great public schools for every student.”

Just the same, many educational organizations express misgivings that Race to the Top is simply more abortive policy under a different name. Ravitch is troubled that what the administration calls “turning around” underperforming schools could translate into mass firings or transference of public schools into private management, when “[n]one of these approaches has worked under [No Child Left Behind].”

To teachers who see themselves as puppets of reform, such wariness and worry is understandable. “Many teachers are just barely keeping up with everything that they already have to do,” says Bailey. Teachers, he says, are “trying to change lives for the better with every moment we have with children. We embrace higher academic goals, better test results, and even greater accountability . . . but in the process, please don’t slow us down.”

July 12, 2010
Next Article: Barack Obama on Education
We enable strictly necessary cookies to give you the best possible experience on Education.com.Cookie policy