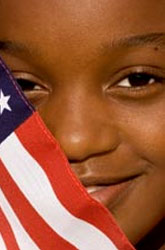 It’s a sad truth that most U.S. children can name more American Idol finalists than they can Supreme Court justices. No Child Left Behind definitely turned the nation’s attention to mathematics, writing and reading, but at the cost, some critics argue, of squeezing out civics. Recently, states like Florida have passed legislation that makes civic ed a requirement, and there’s plenty of buzz about adding civics and government standards to NCLB. Parents can help pick up where the textbooks leave off, and advance their child’s understanding of citizenship. Read on for tips on helping your kids get a head start on civics this summer.

Civics? There’s an app for that. Take advantage of kids’ proclivity for technology and watch democracy go digital. The iPhone offers apps that can put the past in your child’s back pocket.

SwampBits’ America Deluxe spans over 200 years of American history, offering great American speeches and iconic photos in addition to the basics—the Constitution, the Declaration of Independence, and the Federalist Papers.

For older kids, the DIY Democracy app is worth a look. As of now, it only works in California, but it offers a locality-based connection to all levels of government. Users can look up their rights, fix potholes, and contact local legislators, becoming proactive in the democratic process.

If that’s a little much for your child, try helping him get his daily dose of democracy from the Center for Civic Education’s 60-Second Civics, a podcast that “provides a quick and convenient way for listeners to learn about our nation’s government, the Constitution, and our history,” according to their website. Each 60-second tidbit covers a different thematic concept relating to the government, our nation’s history, or the Constitution—“Habeas corpus” and “The Anti-Federalists” are among the minute-long podcasts they offer.

Another great resource for parents is iCivics. Colorful and conspicuously diverse in its cast of characters, the iCivics website seeks to engage the middle school set in the democratic process. The site is the brainchild of former Supreme Court Justice Sandra Day O’Connor, who collaborated with educators and game designers to address what O’Connor saw as a disturbing lack of civic education in America. In “LawCraft”, players can take on the role of lawmakers from their home states, while “Do I Have a Right?” gives kids the opportunity to run a firm that specializes in constitutional law. O’Connor believes that gaming and technology have a place in educating kids, and the iCivics site has been drawing media praise for its engaging and innovative approach.

Our typical approach to engendering civic responsibility in children is direct, often coming in the form of mandated community service. But this, says Garry Adelman, Director of History and Education at the Civil War Preservation Trust, can be ineffective. He talks about civic responsibility as part of a cycle that begins with interpretation, leads to understanding and enthusiasm, and cultivates in kids a genuine desire to help: “The number one thing parents can do to inspire their children is to foster appreciation.” Consider taking your children to some of America’s most hallowed places this summer. A trip to Gettysburg makes that epoch in American history tangible—and once that initial interest is kindled, civic action is only a short jump away.

To that end, the Civil War Preservation Trust website enables visitors to petition against a new casino slated to go up within half a mile of the Gettysburg National Military Park, for example, and another click of the mouse sends a letter of concern to a mining operation near Cedar Creek battlefield. Concern and conservation begin with kids’ personal investment in a site. “Go to a place,” Adelman says, “and get kids interested in something.”

No funds for a summer civics vacation? Look no further than your own neighborhood. Help your kid identify a problem in your neighborhood and come up with an action plan together to solve it. Show her the proper channels of government at all levels, whether this means attending a city council meeting or writing a letter to a local representative. When a young adult sees the democratic process in action, engaged citizenship seems less like something that just happens in the classroom and more like a part of everyday life.

Young Americans are growing up with a lack of civic education, and that, researchers say, is fueling doubt in their generation—not only distrust of the government, but skepticism about their own ability to promote change. If you’re concerned about this lack of civic education in your child’s school, use your summer to draft a letter to your school board and organize like-minded parents. Pro-civics campaigns are gaining momentum across the nation. Perhaps a grass roots effort in your own backyard will be the push your school needs to reinvest in civics and revitalize young democracy.