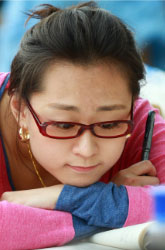 The state of children’s literacy in the U.S. is a significant concern these days. And this concern has led to an aggressive push to raise test scores, which has left many families and teachers reeling.

The National Assessment of Educational Progress (NAEP) recently released its 2009 report known as The Nation’s Report Card for reading in 4th and 8th grade. According to the report, 8th graders across the nation have made some improvements in reading comprehension, but overall results for 4th graders were unchanged. (Results are based on representative samples of 178,800 4th graders from 9,530 schools and 160,900 8th graders from 7,030 schools from across the states.)

If reading scores have improved little if any in the past few years, has all the pushing and testing been in vain? Are we expecting too much from our children?

According to William Harvey, Executive Director of the International Reading Association, the answer is no. “The lower you set the expectations, the lower the performance,” Harvey says. “We don’t want to dumb down education—we want to challenge children to do better.”

Harvey notes that the U.S. ranks quite low in terms of literacy skills in developed countries. (In fact, the U.S. is at the bottom of the top 20 developed countries, according to a 2009 United Nations Development Program report.) “From the standpoint of human capital development, we are disadvantaging our students because they are going to be competing with students from other countries,” Harvey says. “This is a real critical consideration for us in terms of our standing as a world leader.”

But it’s not for a lack of trying. And since 2001, there’s been such an extreme push with No Child Left Behind (NCLB) that there’s been something of a backlash in recent years. Teacher accountability was dramatically hiked up with NCLB, and many teachers began teaching to tests out of necessity—and though testing doesn’t actually begin until 3rd grade, even kindergarten teachers are preparing their students for the tests.

And this emphasis on test preparation is still happening.

Harvey describes an analogy he once heard from a friend who grew up on a farm: Just because you put animals on a scale doesn’t mean they’ll gain weight; you have to feed them if you want to see gains. In other words, frequent testing will not ensure increased test scores.

We have best practices when it comes to teaching young children to read, but education researchers and policy makers in the U.S. are still working to define and develop an overall education system that will reach every student in all states. How can one teacher raise up each child to achieve her greatest potential and also, at the same time, leave no child behind?

The results of The Nation’s Report Card show that there are still gaps among Caucasian, African American, and Hispanic students. “That’s a critical concern for us given the demography of this society,” Harvey says. “If those young people don’t have the skills to be successful, that’s going to pose tremendous problems for us down the road.”

Harvey says what we’re lacking in this country is professional development—enhanced and continuous professional development for teachers. “These are the people who are delivering the information and assessing student progress,” Harvey says. And they aren’t going to be on top of their game, he says, unless they’re continually sharing and learning from colleagues and mentors. “The goal is to reach each and every student, and we have to rely on the expertise of the teacher to make the appropriate adjustments to the curriculum,” Harvey says.

Susan Neuman, Professor of educational studies at the University of Michigan, believes it’s the curriculum that’s lacking. So lacking, she says, it’s “boring our students to death.” Neuman explains that in order to effectively engage students in a subject matter, teachers have to be able to present high-quality books—books that students are eager and excited to read. “We need more higher-level science curriculum, higher-level social studies curriculum…. You can’t read if you have nothing to read about!” she says.

Neuman, who previously served as Assistant Secretary of Elementary and Secondary Education during the Bush administration, was primarily responsible for implementing NCLB. In her opinion, the modest gains on The Nation’s Report Card at the 8th grade level are most likely not a result of NCLB. “I think if this was really an effect of NCLB, we would have surely found it at grade 4,” she says. “I think that one of the things NCLB did do however—it helped focus on basic skills. What it didn’t do is, it didn’t raise the bar in terms of what is really needed to really be proficient.”

Neuman says the kinds of interventions that were initially implemented to improve reading at grade 4 were effective to some degree, but we’ve hit the ceiling in terms of what we can expect to see in gains. Now she says we need to move into the more complex and slower-growing skills such as comprehension, building background knowledge, and vocabulary.

Expectations for the development of these kinds of skills are being looked at carefully as discussions continue about reauthorizing the Elementary and Secondary Education Act (ESEA). Secretary Arne Duncan said in his March 17 testimony before the Senate Health, Education, Labor, and Pensions Committee that they are asking the states to adopt federal standards and assessments (as opposed to the current state standards), which will raise the bar and hopefully help to meet the goal of closing achievement gaps.

Visit NAEP online to read The Nation’s Report Card. The NAEP reading assessment is administered by the U.S. Department of Education, and policy for NAEP is set by the National Assessment Governing Board, an independent, bipartisan group of public officials, policy experts, teachers, and others.