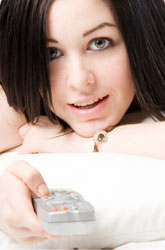 It’s been 17 years since The Real World hit the small screen, and ever since then, reality TV has all but taken over nighttime programming. These days, America tunes in to watch eligible bachelors, budding models, singers, dancers—even budding skinny people (aka “biggest losers”). Many of us even know someone who has had 15 minutes of fame.

How does all this reality television affect our kids? The bottom line is: They think it’s real. According to Maria Ivancin, Assistant Professor of Communications at American University, many preteens and teens are unaware that these programs have producers who work hard to make the shows appealing. “Even though the shows aren’t scripted, there are writers hired to figure out the best outcome from an entertainment standpoint,” Ivancin says. “Many adolescents and teens don’t really get that.”

The title of the genre—“reality TV”—holds weight and legitimacy for adolescents and teens, and according to Ivancin, they are more likely than adults to accept the reality at face value. Ivancin, who coauthored a discussion paper for the Kaiser Foundation titled “The ‘Reality’ of Health: Reality Television and the Public Health,” says reality TV can have very real health implications: “Even shows that aren’t related to health—like Survivor—put people into situations that are controlled on the set, but kids don’t understand that.”

The risk? People try to mimic the behaviors without having the controls.

Dr. Rocio Rivadeneyra, Assistant Professor of Psychology at Illinois State University, agrees that reality shows are important to pay attention to because of their behavioral influences. “Preteens and teens watch these shows and believe this is how they are supposed to behave,” Rivadeneyra says. “By watching The Bachelor, we understand that if you want to treat a woman right you give her a rose.” Content analysis of these shows has found that sex is portrayed as a competition. “We have to compete with people for other people’s affection,” Rivadeneyra explains. “This gets played out in these reality shows—the person is dating multiple partners at once and engaging in sexual behaviors with more than one person.”

Little research has been completed looking at the effects of reality television on teens, but Rivadeneyra says we already know a lot about the role of media and how it influences young people: “What we know is that children and teens are more likely to take away messages and have their viewpoints influenced by television when they aren’t getting their information from elsewhere.” Rivadeneyra says this is one of the concerns about the sexual messages on reality TV shows. Many parents aren’t talking about sex with their adolescents and teens due to embarrassment, but by not talking about it, parents are essentially saying that they’re okay with the messages their kids are getting from the programs.

There is plenty of negative discussion about reality television, and television in general, and its influences and effects on people, but many of us wonder if there’s a broader, more positive side. Can we get anything good from these shows, beyond entertainment? Can American Idol, for instance, inspire teens to reach for their dreams? Can reality TV positively influence teen’s behavior and their life decisions?

“Anecdotally I would say ‘yes,’ but I don’t have any research to back that up,” Rivadeneyra says. “I remember watching Growing Pains as a teenager and thinking ‘Oh, a psychologist. That looks cool.’ I do think television can give you at least a televised presentation of different roles and jobs.”

And Ivancin points to the Biggest Loser as an example of a reality show that can have positive influences: “The show features real, every day people that viewers can relate to. This may have greater impact than an expert giving them the information.” Ivancin points out, though, that the negative behavioral influences of The Biggest Loser are also relevant: The show can have the effect of setting up unrealistic expectations and can lead to people under-eating without the careful attention of a physician.

“We tend to think of television and media as all good or all evil, but we need to think of it as a tool,” Rivadeneyra says. “We need to remember that we can use these shows to teach our children—to facilitate conversations or to add to the conversations we’re already having.”

Rivadeneyra points to a study that followed up with families after the airing of a Friends episode where the condom broke. The researchers found that a large percentage of the families who had conversations with their kids used the episode to discuss contraceptives.

“Television is appealing. And if you can use that to help teach your child about something, that’s pretty powerful,” Rivadeneyra says. “With reality TV, we can teach our kids to think critically about what they’re watching. What’s real about the shows and what’s not. It’s important for them to have media literacy.”

Ivancin agrees that media literacy is necessary. “We teach college students media literacy—that a lot of what you see in programming and advertising and news is manufactured—and much of it can be subtle,” Ivancin says. “But it’s important for younger people, teens, to understand this, too. Particularly with reality TV shows. The more kids know about this, the smarter they will be and the better decisions they will make in their lives.”

Next Article: The Media as an Influence on Socialization
We enable strictly necessary cookies to give you the best possible experience on Education.com.Cookie policy