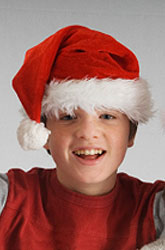 You know the drill: You do everything you can to keep the magic of Christmas alive, but some loud-mouthed kid, a grouchy relative and even your own slip-up can ruin the secret of Santa. If your little one doesn't believe in Father Christmas anymore, that's one thing; if he actively spends time trying to ruin the Santa story for other kids, you've got a problem on your hands. Other parents will be none too pleased if your little one is the pragmatic storyteller that debunks certain Christmas myths, so make sure you're equipped to help your child understand the meaning and importance behind keeping the secret under wraps.

Okay, so your child doesn't believe in Santa in the whole climbing-down-the-chimney sense, but it's a perfect time to teach him about the real Santa. The real Santa Claus is based on Nicholas, a Greek child of wealthy parents who died when he was young. Nicholas was a Christian and decided to spend his inheritance on giving gifts and money to the poor. He was later Sainted and remains a much-loved historical figure within the Catholic Church. Taking the time to learn about St. Nicholas' life and ministry might help your child understand that Santa Claus is based on truth.

Before you bring your child to a holiday party or dinner with his younger cousins, make sure he knows to keep his lips zipped when it comes to Old Saint Nick. While he doesn't necessarily have to lie when his believer cousins gush over Santa, he can leave the conversation or use past memories to talk about the same. He is not, under any circumstances, to ruin the Santa story for anyone else.

Santa can sometimes be explained in the same way different religions are explained to kids. By explaining to your child that some families choose to believe in Santa and others don't, he can understand to respect different traditions. Just like he wouldn't make fun of another child for celebrating Hanukkah instead of Christmas, he should never taunt another kid because she believes in Santa Claus. Putting the explanation into these terms can help your child relate the Santa story to other family beliefs.

If your child is one of the kids who still believes in Santa, he can still wreck the surprise by divulging details of traditions that only happen in your home, leaving other kids to question why "their" Santa doesn't leave presents unwrapped, eat only oatmeal cookies or visit with kids at the mall. Remind your believing child that while Santa does those things for your family, he is different to everyone. If he overhears another kid talking about how Santa always comes through the front door of their apartment, your child doesn't need to defend your chimney climbing version of Santa—knowing that different families have different Santa traditions and that's OK.

What greater way to get your child to learn the spirit of Santa by helping him be involved in becoming Santa for someone else? Licensed psychologist and writer for Psych Central, Dr. Marie Hartwell-Walker suggests having your child volunteer or get involved with helping someone less fortunate. By bringing gifts for a toy drive, dropping off cans at a food bank or choosing a family to offer help to, he can understand the idea that Santa lives within everyone. Besides the fact that it's a great way to spend the holidays, volunteering can help your child become a spirited conspirator, so involved in making the season merry for others that he doesn't think to blab the truth.

Make sure that you don't become disappointed in your child's turn of heart away from Santa that you actively try to force the issue. Yes, it's sad when your little one suddenly doesn't believe in the jolly guy, but making him sit on Santa's knee could land you in a yelling match about the reality of Santa in front of an audience. By the way, a 2003 study found that 95 percent of kids seeing Santa in the mall were indifferent or hesitant anyway, so you can probably skip the visit altogether and save yourself the trouble.

If you do get an angry phone call from a parent accusing your child of ruining Christmas and the Santa legend for one of his classmates, take care that you don't immediately go on the defensive. While you might not do the whole Santa thing in your home, it's important to remember that other families base their entire holiday season around it. Apologize and then have your own child apologize and explain that "his" Santa is different and that the other child's Santa must still come to visit. It's your best chance to smooth things over and an excellent opportunity to spark conversation with your non-believer.

Christmas can be a magical time, whether your family has Santa come to visit or not. But it's important to remember that it's also a magical time for schoolmates, relatives and neighbors. By giving your little one the holiday 4-1-1 before you find yourself in a sticky situation, you get to celebrate Christmas that you want while allowing others to do the same. Bring on the fruitcake!